So a few weeks ago a coworker of mine who teaches the same classes as me went to the assessment summit at HTS and came back guns blazing with some amazing tools and ideas, and the first thing she did was sit down with me and go over her favourite strategy.

She went over a really lovely way to collaboratively create a rubric with the class to use with assessment and after doing it a few times I thought I would share the steps as well and reflect on it with you.

After the partner has gone back to their seat the other partner now has a chance to go up and look over the groups that were made. They also get to move any post-its they think do not work. When they are done they can go back to their seats.

Now you go up and read over each group and as a class you name the category of each group that has been made. If you want to take it a step further you can also discuss with the class whether this category fits as Knowledge, Thinking, Application or Communication and see what they think.

You take their groups and content and put it into a rubric, using their own words and categories and organize it into a single point rubric. When you are done show it to the class and discuss if there is anything they may want to change or wording they don’t like. 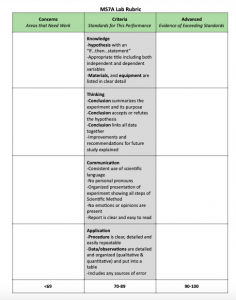 Where I went from there….

After having my students design this rubric, I went through their reports and wrote feedback and comments on the rubric as well as in their report. I assessed it and had their mark written down separately. I then conferenced with them and had them also use the rubric and my feedback to assess themselves. The results were that the students were either totally on the ball or harder on themselves than I was. When they first started it was such an interesting discussion to have and to watch them really look at their work and assess it. I could see they understood where the mark came from and we could clearly discuss what to work on moving forward. They also focused much less on the grade itself.

Which leads me to this morning, I was just finishing up marking a second round of lab reports. Yesterday I had informed my students that this time we would be deciding their grade together instead of separately like last time. I had expected panic but instead I got calm smiles and excitement. This was no longer something scary looming over them or me. I was not thinking about the percentage mark and I don’t think they were too. I was also thrilled at how fast the shift happened. A lot of this is in part to the fact that the whole grade 7 team has now been implementing this in each class so the students are much more familiar with it across the board. On top of that I have a math assessment coming up and I’m so excited to create a math rubric with my students and to see how they do. This is exactly the kind of thing I want to work on in Cohort 21 and the results and reflections I see from my students are so meaningful and exciting for me as an educator.

When my students make this new math rubric I’ll be sure to share it! I’m really excited to see what they do next. 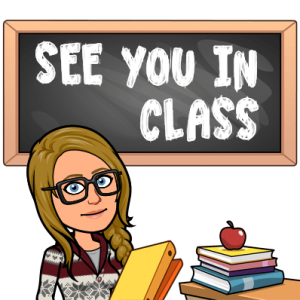