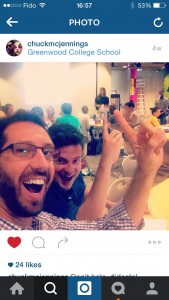 At the end of the school year in June, and again this September, I had the great pleasure of leading my colleagues in two Design Thinking workshops, to help generate ideas for our Professional Growth Action Plans for this year. As you may know, this was part of my Cohort 21 Action Plan from last year – to bring Design Thinking back to Greenwood.

The energy in the room during the Design Thinking workshop was great. People were discussing their goals and plans in a way that allowed them to develop wild ideas, while also working within constraints. For me as a facilitator, it was a magical melding of the ten years and two careers and also a learning experience that set me in motion for redesigning my own courses for the upcoming year. 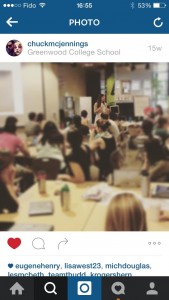 And so, inspired by these workshops and also the work that @gnichols did this summer with the Teacher’s Guild, I set out to teach my first classes on a different foot. Rather than stand in front of the class and tell them about the course expectations and dive right into content, I decided to start all of my classes this year with a Design Thinking challenge.

I introduced the activity by giving them some rationale for this approach to learning: I discussed how in the real world, there often isn’t just one right answer, but that more and more businesses and governments needed people who could solve problem, innovate and come up with new ideas. And so, in my classroom this year, there would be no right/wrong answers, and that the term “can’t” is officially banned from my classroom.

No right or wrong answers? Then how would they be evaluated? How will students know if they are right? Well, I haven’t actually figured that out yet, but my goal is to move them towards ideas, solutions, innovations, or even just more questions, rather than always trying to find the right answer. I know that I can evaluate this type of thinking which emphasizes the process of learning rather than just the outcome. And I will definitely refer to and rely on @ehitchcock’s work on Standard Based Assessment in order to make this “no wrong answer” dream a reality.

In class we also discussed Carol Dweck’s concept, “the power of yet” and so when a student says “I can’t”, we should all respond with “yet”. It was amazing how quickly the students bought into this idea. Within the first 75 minutes, I already had students correcting each other – and me. For example, I said “I can’t get the sound to work” on the video and at least two students called out “can’t yet!” What a way to start the year.

And so, back to the Design Thinking challenge. I gave students a challenge that they would be familiar with. My 11’s were asked to identify a problem/opportunity in the Greenwood community based on either the environmental, economic, or social sustainabilty of the school, while my 12’s were asked to improve the park across the street and my advisees were asked to re-design their peer’s morning routine. 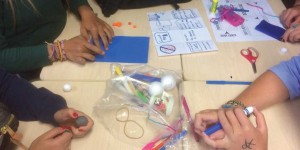 In less than an hour, students developed a user profile and empathy map; defined a problem for their user; came up with absurd, inventive, and plausible ideas; refined one concept; made a prototypes; and pitched their idea to the class. Users ranged from parent to teachers, to elderly lady in the park, to an exchange student from Iqaluit. Problems ranged from access to playing fields, to students spending too much time on cell phones, to the economic sustainability of independent schools, to providing more amenities for seniors in the neighbourhood. And the possibilities were endless. Students developed ideas using the “crazy eights” brainstorming method, where they have 45 seconds to draw an idea, then 45 seconds to draw a nw idea, and so on, until they have eight ideas in about eight minutes. As they were drawing, their ideas got sillier then smarter, whimsical then more realistic.  They say that the first day of school sets the tone for the year in your classroom.

One of the best – but also potentially terrifying for teachers and debilitating for students – aspects of Design Thinking is that you never know where you’re going to end up. For teachers, this means letting go of control, and for students this means having to think laterally and divergently, which can be challenging at first. But the result is a classroom where anything is possible.

This year, I’m planning to to spend some time looking into structures that can be used to help scaffold this experience for students. I’d love to hear suggestions and share resources….any ideas out there?

21st Century Skills, Action Plan, Desigh Thinking
3 comments to “The Classroom Where Anything is Possible”