My last post about Jay Atwood’s presentation on finding your “hedgehog” has led me to think about how much my own strengths and passions were taught to me, and how much of it is simply innately part of my own mindset. I am open to learning as I go, trying new things and not being afraid to fail because I have creative confidence and a growth mindset. Did I learn that mindset in school? Did it come from my parents? Or is it simply an innate part of who I am? Can I teach this to my students by just modeling behaviour?

How might we encourage students to dive into problems when they don’t know all the answers; to look at problems as opportunities to help other people; and to be fearless in the face of failure?

There are tons of resources and research on this topic. I’ve read the work of Carol Dweck on Growth Mindset, watched TED Talks by Angela Lee Duckworth on Grit and even had my students try WOOPing after learning about the work of Gabriele Oettingen. And over the years, I’ve tried to develop these ideas into practical methods in my classroom. At Greenwood, we refer to all of this as Intellectual Character, and it is one of the pillars of our work as teachers. According to David Light Shields:

In the teaching of every explicit curriculum, there is an implicit curriculum. When teaching is focused on transmitting facts, training in discrete skills, and preparing for tests, students are implicitly taught that the content itself is most important. When the content is taught in a more inductive, open, exploratory manner, when the teacher models and encourages inquiry, open-mindedness, critical thinking, and curiosity, then intellectual character can be developed along with content knowledge (Shields, “Character as the Aim of Education”, 50).

Each year, my grade 11 students take on a design thinking challenge that seeks to address sustainability within our food system. The students start by learning about the design of our food system from a variety of perspectives. We watch documentary films about farmers, interview other students, work with students at Humber College to learn about design, and read authors like Michael Polllan.

Learning design and building techniques alongside students at Humber College.

The students begin to understand that there are many complex problems that need to be solved within our food system, from pesticide use to obesity and food deserts.

They then target one user within the food system: it could be a young family on social assistance or a college student living in a dorm. Some have chosen to work from the farmer’s perspective, others from the food distribution point of view. They develop a profile for their user, and do their best to get some actual, first hand feedback from these users.

Next the students work through a series of prompts that require them to think deeply about the root of their problem. Students move from statements like: “My problem is that organic food is too expensive” to “How might we lower transportation costs for small, independent farmers?”  Or “My problem is that Canadians must rely on imported food for most of the year” to “How might we provide sustainable, locally grown food to communities in Canada’s Northern Territories, year round?”

I added this highly structured process of refining the problem to the project this year, using an activity from Stanford’s d.school. As a result, student’s creative approaches to the solutions showed more variety in both scope and product than ever before.

A Mindshift for Students And Teachers

This type of project is new for students. Instead of the teacher telling them: “You need to know X, and you’re going to produce Y to show me that you know X” I say to them “You tell me: what is the problem and how are you going to solve it?”

Naturally, some students struggle with this at first. They want to know how to be successful. I provide success criteria based on their process, thinking skills, research and application, but there is no one right answer. This is a challenge for some students, especially those who figured out how to get good marks by memorizing right answers. 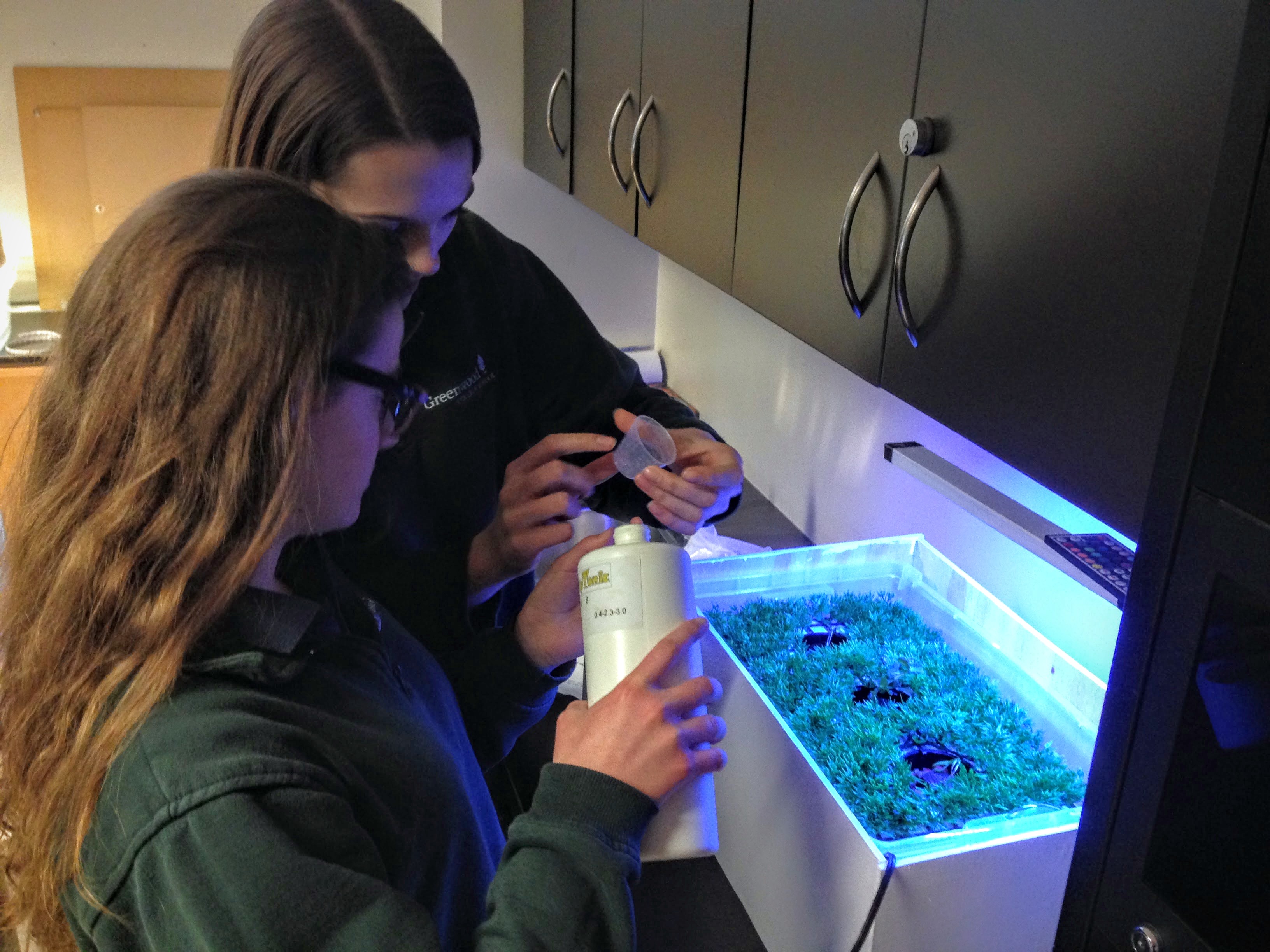 And more importantly, as the teacher I don’t always know the answers. I learn alongside them, figuring things out at we go. I can’t count the number of times a student has asked me a question to which I answered “I have no idea.” But, then with a little research and some trial and error, we figure it out. For example, four years ago, a student came to me and said “I want to build a hydroponic garden for my solution.” I had exactly zero experience in hydroponics. In fact, I am a borderline house plant serial killer. But I called a couple friends, paid a visit to a local hydroponics store and set to work with my student, building a hydroponic farm and flooding the classroom several times along the way. The hydroponic garden caught on the following year and led to aquaponics and incorporating LED lights. Now, we are working with a grade 5 computational thinking class in Germany to develop computer programs to control our systems. Why not?

The point is, although we struggle at first, students soon begin to take ownership over their projects and the class becomes about them and their projects, not about me or what I have to tell them. We arrive in class and before I can even give any instructions, the students set to work on their projects. This project lasts six weeks, and after the first few classes of structured design thinking methods, I don’t make a single lesson plan. I can’t possibly plan where they are going next and they are all going in different directions. Instead, I spend my time hopping around from student to student, helping to troubleshoot, pushing them forward, giving them resources, encouraging them to think deeper or differently, and reminding them to reflect on their work.

The Keys To Success

Over the years, I have discovered a few things that help to create a successful design thinking, project based learning endeavour:

At the end of it all, the students have something that they have created, that they can share with others and that solves a real problem for real people. Will any of them go on to a career in agriculture? Most likely not. But, will they approach life with a new mindset? Maybe, a few of them will catch the mindset through the process, and jump into their next challenge in life, fearless in the face of failure.