As you may know, for the past two years I have been doing a “20 Time” project with my Grade 11 students. And for the past four years, my Grade 12 students complete a unit called Choose Your Own Adventure, in which they design their own project around their own interests. You might say that I’m a bit of a nerd when it comes to student-directed learning. So, you can probably say that I had a bit of a nerd-out moment when I arrived at the Google Innovators Academy and found that my coach for the week would be none other than Kevin Brookhouser, the 20 Time guy. 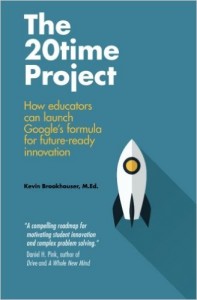 Kevin has not only written a book about 20 Time projects, but he is also the creator of 20Time.org, a website that aims to help teachers around the world create 20 Time experiences for their students. I’ve shared it with my colleagues at Greenwood, and we’ve used many of Kevin’s resources and examples from his students in our classrooms. The results have been great. One of my students created a cooking blog and Instagram called Hope in the Kitchen; others have built a YouTube Channel called Chemysteries to help students master Chemistry skills and concepts; and others have taught themselves how to knit and launched a social-enterprise business to sell their products and raise money for charities, all via an Instagram account that has more followers than I do.

So, let’s rewind to last week. Kevin is my coach for the Innovators Academy, and I am trying to play it cool with my mini-celebrity moment.

Kevin presented on “Design & Coding,” but his presentation was much more than just a pitch for why we should teach computer science because in the future everyone will need to know code, etc. Instead, he delved into how coding can be a gateway for students to learn about systems thinking and to direct their own learning. My students going door to door to combat invasive species.

He started an example that was close to my heart: his students identified the problem of invasive species destroying ecosystems near their school, so they designed an app using MIT’s App Inventor (an awesome tool for students!) to help users identify native vs. invasive species and then instruct them on which plants to remove and which ones to keep. A teacher after my own heart! If you don’t already know this about me, I’m a bit of a tree nerd, and my students spend a lot of time advocating — even going door-to-door — for the life of native species. So Kevin won me over right away. 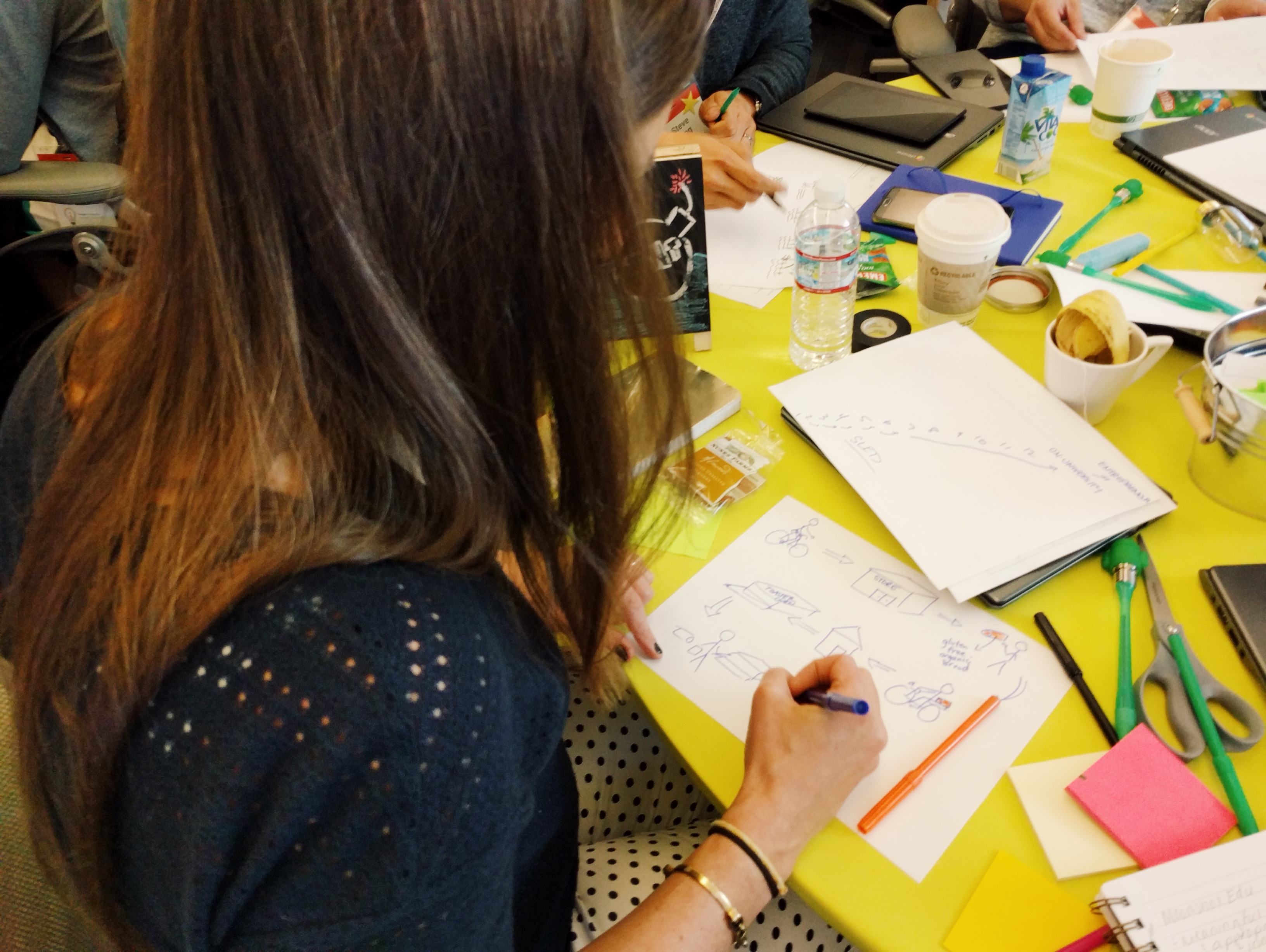 Kevin went on to have us participate in an activity called Draw Toast. If you haven’t seen this before, it’s an exercise that explains how systems thinking works, but having participants draw the experience of making toast. The process comes from a TED Talk by Tom Wujec, and his accompanying website. What it reveals is that when we draw out a process, we start to see a series of nodes and links – and this can be applied to anything from how to make toast, to how to build an Ikea cabinet, to how to build a self driving car. In other words, it can facilitate collaborative thinking that allows people to solve “wicked problems.”

The Draw Toast activity was designed for businesses, and in Kevin’s case he was encouraging us to start developing solutions for our Innovators projects. However, I found that the process fits in nicely with the Design Thinking methods, as it encourages designers to think about a user and how they experience something – in other words, empathy. In addition, part of the magic is in the collaborative thinking experience that results when you see that others in your group approached the same instructions from vastly different perspectives. We quickly realized that our brains were better together than alone. 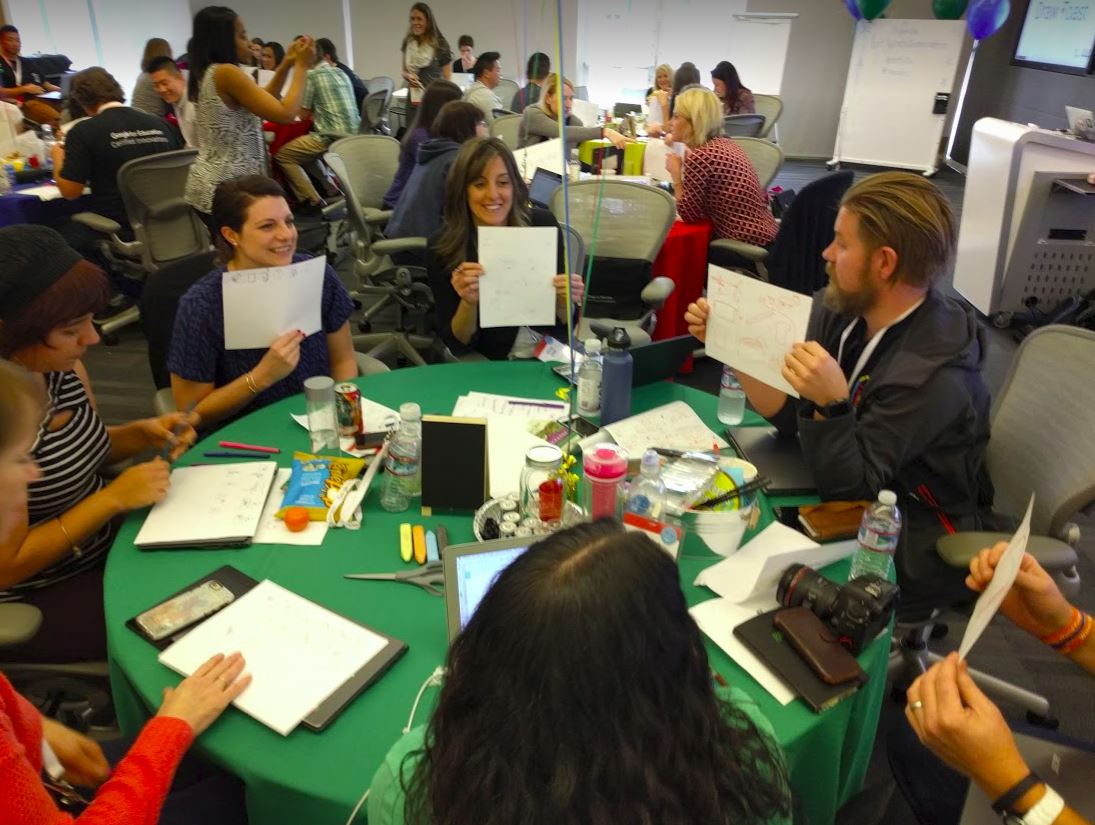 Although designed for business, Draw Toast could also easily be transferred to the classroom in many ways:

As for how I applied this to my own project…that’s will need an entirely different post!

Thank you, Kevin for a great jumpstart to the process and for encouraging your students to wipe out invasive species using technology. I might be calling you for that app!  Up next in my Innovator Academy blog series: Happiness and Emotional Intelligence, with the very happy and intelligent, Roni Habib, founder of EQ Schools.

In the meantime, here are some of the Innovators’ creative approaches to drawing toast: 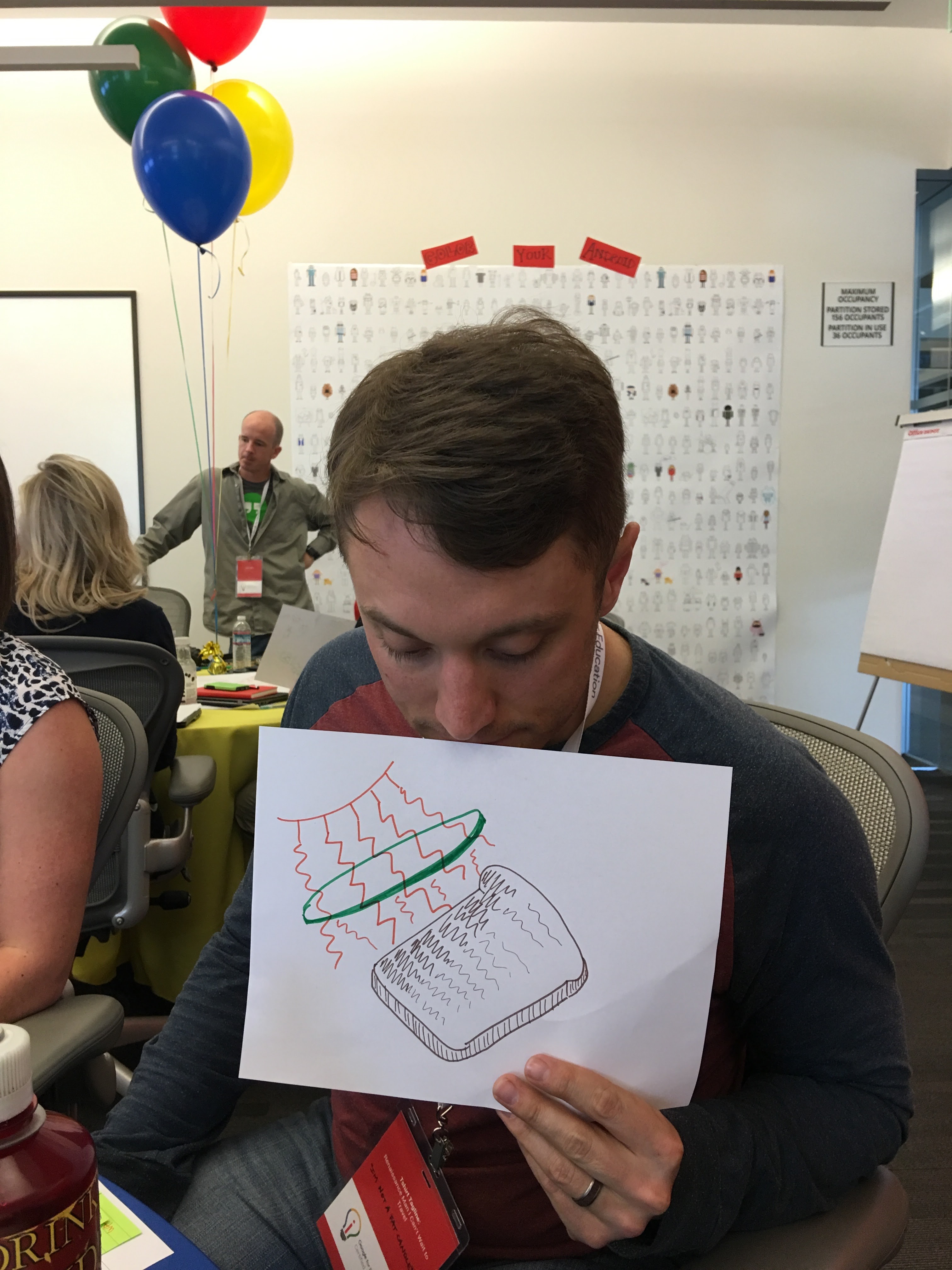 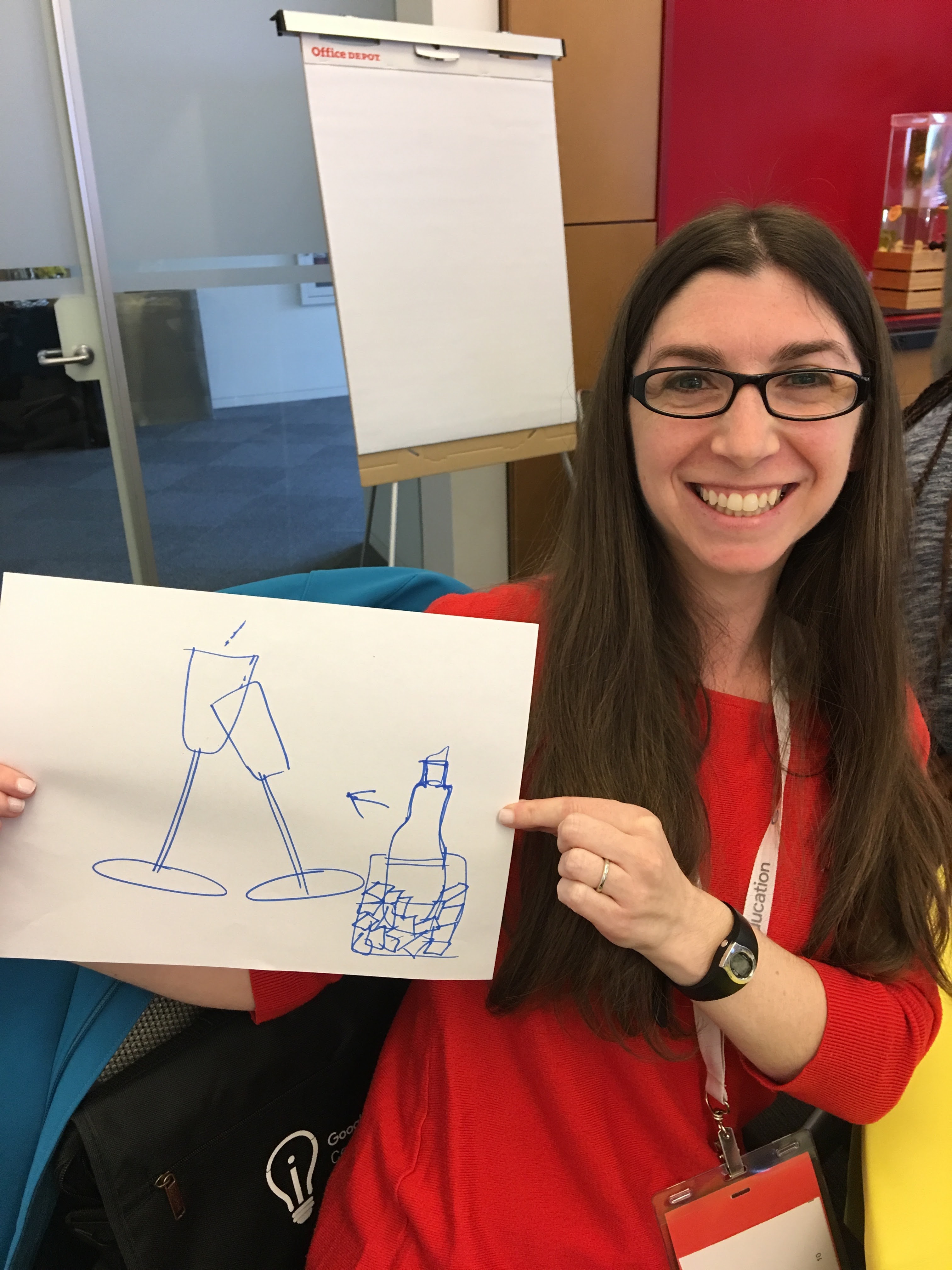 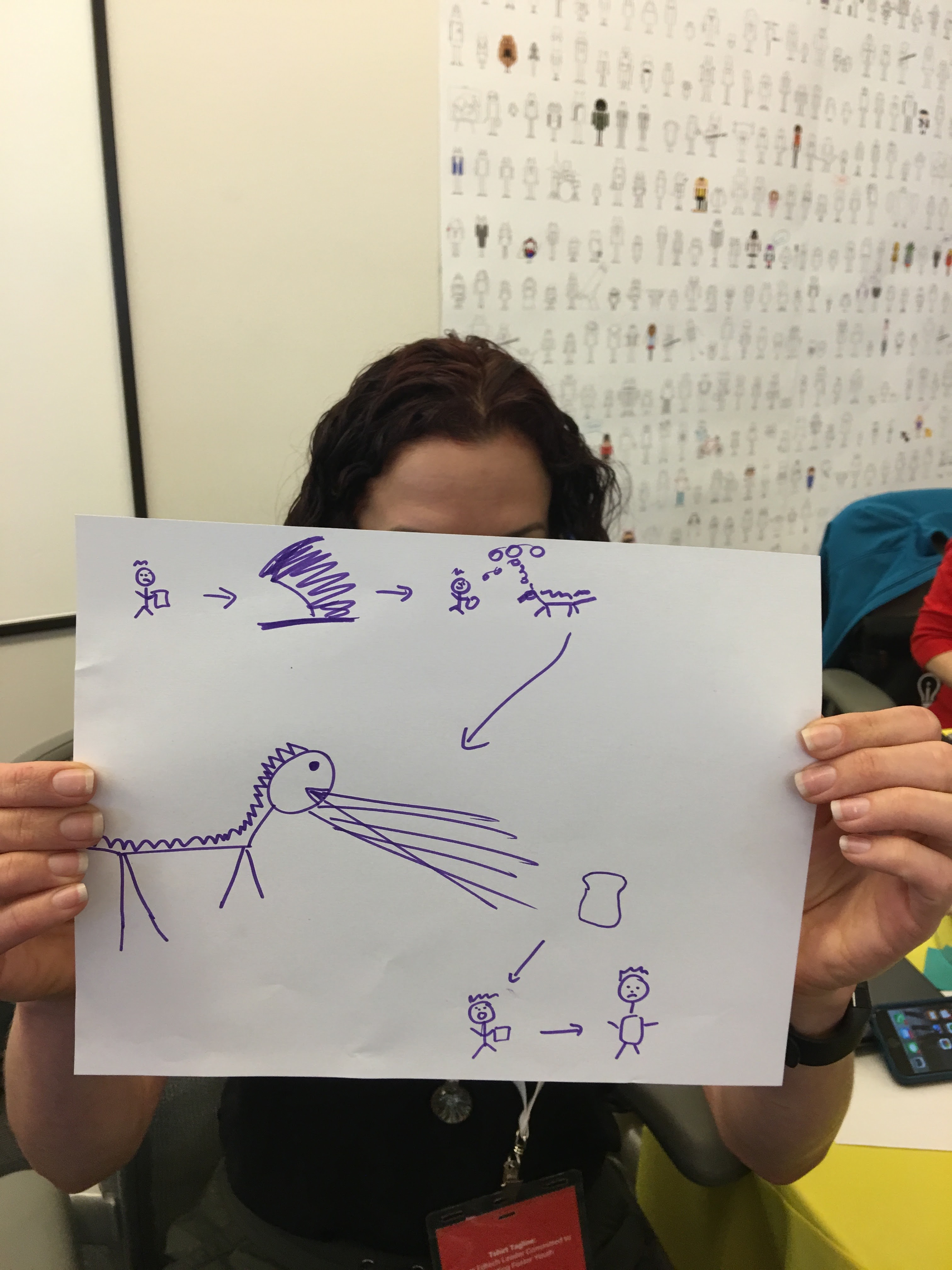 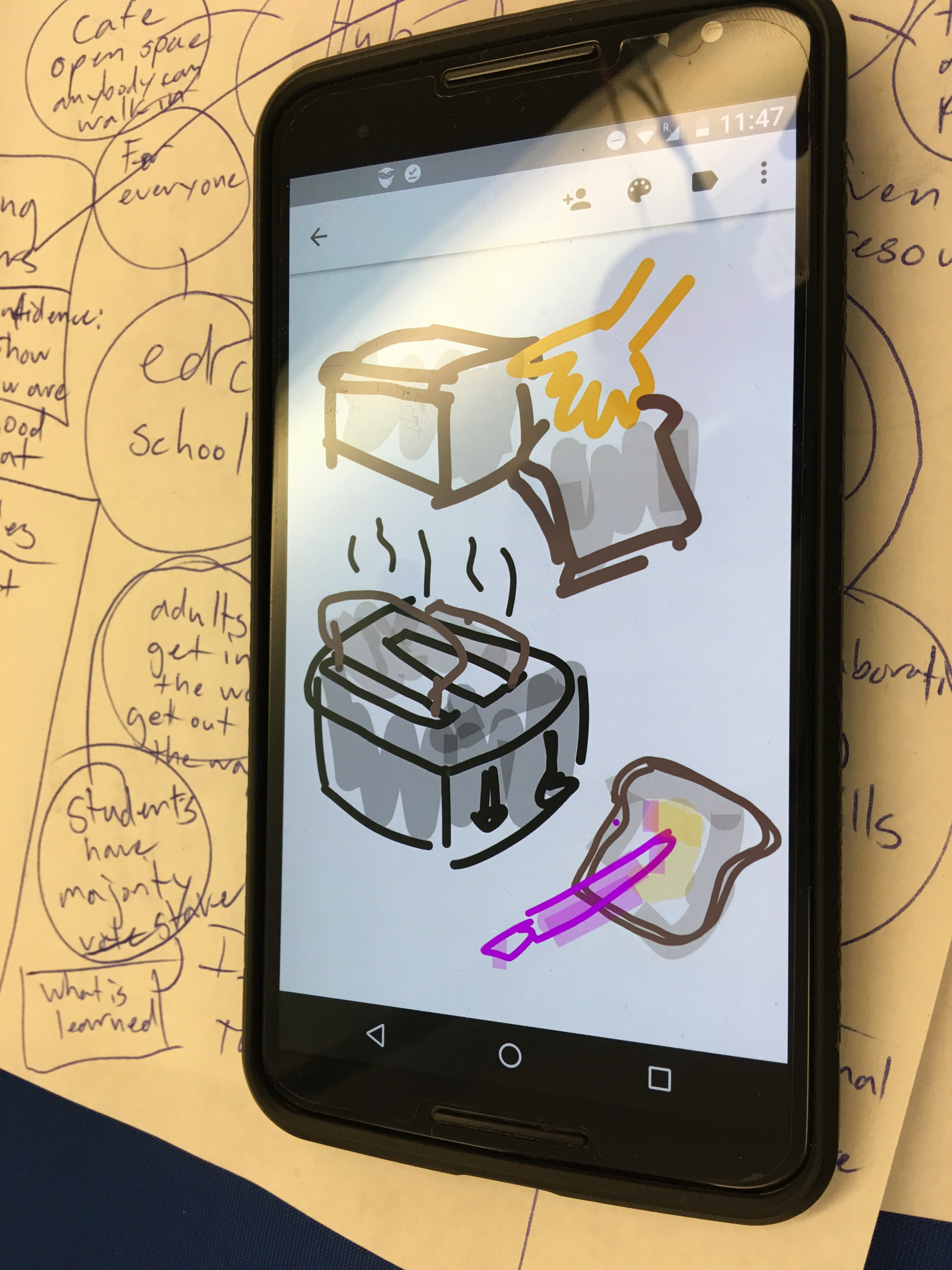