How many times in your life have you wanted to be in two places at once? We have all experienced #FOMO (Fear Of Missing Out) at some point in our lives, whether it’s being double booked on a Saturday night or being home sick from work on a day when we had an awesome lesson planned for our class. 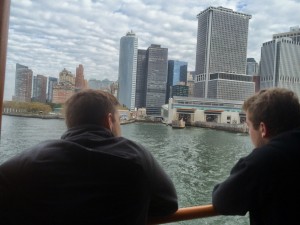 My view from the first Cohort 21 F2F session.

This past weekend, I thought that I had found a cure to #FOMO. Through the power of the internet, the genius minds of developers at Google, the help of fellow Cohort 21 facilitators and free public wifi on the Staten Island Ferry, I was able the be in two places at once. Kind of. Or maybe what ended up happening was that I wasn’t really present in either place? So, later in the week, I decided to experiment further with Google Hangouts in my classroom to see if there was a better way to use this technology. I found that with a little legwork and patience, Hangouts can be used effectively in a one-to-many setting where everyone is participating virtually.

Being in Two Places At Once

The first Cohort 21 F2F session happened to fall on the same date as a field trip to NYC that I organized for my Grade 12 Green Industries students. I was able to call-in from the Staten Island Ferry when we had wifi, and it was great to pop in and hear what was happening and try to contribute briefly to the conversation. However, as Meg Wallace pointed out in her post earlier this week, it was challenging to feel fully engaged in the Cohort 21 experience. At the same time in NYC, I was constantly preoccupied by my phone as I followed Tweets, updates, and searched for a public wifi that would allow me to “Hangout.” The result was a slightly diminished experience on both ends.

While I could go on, as others have, about the hazards of ubiquitous technology and how it can prevent us from living in the moment, instead, I’d like to discuss how we can harness some of these technologies to engage, rather than distract, our students.

After this experience and working with Adam Caplan to put together the sessions on Google Apps for Education, I decided to give Hangouts a try in my classroom. As part of the first unit of landscape architecture in Green Industries, my students are required to be familiar with the design principles laid out in their textbook, High Performance Landscape Guidelines. In the past, I have had students jigsaw this portion of the text book. Knowing that students hate giving/listening to class presentations and that small group jigsaws made assessment difficult as it required me to be in many places at once, I decided to use Hangouts to solve my #FOMO problem.

Students participating in a Hangout on landscape design.

Students participated in a traditional jigsaw activity with a twist. The conversation was captured via the “Hangout On Air” function, with members signing in from different locations around the school (which helped to reduce feedback from their microphones). Each student presented his/her section, and using a timed protocol, other students were required to ask questions of the presenter to deepen their understanding. I was able to pop into each hangout as it was happening, and then watch the conversation in its entirety via the YouTube link.

The results were mixed. First, we had to go through IT in order to have the Hangouts function turned on, and initially it didn’t work. Then, when we tried it with the my first section of course, we spent the majority of the time trying to get everyone on to Hangouts and by the time they were all logged in, we didn’t have time to finish the activity. As Ed Hitchcock noted in his blog post, ideally we want technology to be transparent, and this was not a good example of transparency! This class also found it challenging to take the experience seriously, so the conversation lacked depth and not all participants felt equally engaged.

However, with the glitches out of the way in the first section, my second section found much more success. The conversations, which lasted 50 minutes, showed excellent student engagement and there was accountability built in through the fact that they were each on screen, viewable by their peers and me, throughout the conversation. In surveying the students afterwards, they all said that they paid more attention to their peers than they would have if it was a class presentation, and they felt more willing to speak up and ask questions than they would have in a small group. In addition, there were a few students away (coincidentally, on a trip to NYC), but they will be able to catch up on what they missed by watching the YouTube video of the conversation.

The main differences between this type of interaction and my experience at Cohort 21 last weekend was that the students in this case were presenting directly to their peers and the entire conversation was happening online, rather than a hybrid. While there was a learning curve in getting the technology set up, I believe that once the students become familiar with the process, we can harness the power of Hangouts even further. They are already talking about virtual extra help sessions, collaborating on group work when they are away, and using Hangouts to catch up on missed classes.

I hope to continue to experiment with and work towards mastering the superpower of being in two places at once. In the meantime, I’m curious to know if anyone else has tried Hangouts with any success in your classrooms?