My goal for this year was to provide more opportunities for my students to communicate orally in French in an authentic manner.

I had heard of Harkness tables from the English Department at my school, and I have been playing with this idea over the past couple of years. I didn't realize its origins until I came across this site: http://www.exeter.edu/admissions/109_1220_11688.aspx.

"On April 9, 1930, philanthropist Edward Harkness spoke to Exeter's Principal Lewis Perry regarding how a substantial donation he had made to the Academy might be used:

'What I have in mind is teaching boys in sections of about eight in a section . . . where boys could sit around a table with a teacher who would talk with them and instruct them by a sort of tutorial or conference method, where the average or below average boy would feel encouraged to speak up, present his difficulties, and the teacher would know . . what his difficulties were. . . This would be a real revolution in methods.'

The result was "Harkness Teaching," in which a teacher and a group of students work together, exchanging ideas and information, around a table."

[Note: I have taken myself out of the equation in order to allow me to evaluate while the Harkness is taking place.]

A HarkMess table moreso than Harkness?

I wanted student input on the format of the the final Harkness table, so I decided to do 2 practice Harkness tables and then a third as an assessment of learning. The students were discussing health in general (lifestyle, body image, dieting etc.). After each Harkness, I asked for their feedback with the intention of using it to improve their experience. Here’s what happened:

(I knew things would get messy! My original unit plan lies somewhat neatly in the boxes. My students’ feedback is splayed and layered everywhere else!) 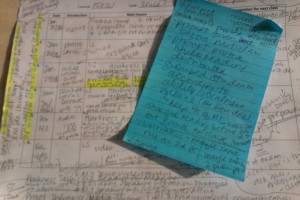 My goals were lofty - to get students to:

As this particular course has 2 sections - one of 16 and one of 14 students - I randomly divided then into two groups. I handed out a sheet with the oval for tracking the ‘web’ of speakers (@mrcaplan pointed me to the following link for resources: http://www.edutopia.org/stw-collaborative-learning-resources .) On the other side was a page with vocabulary words (French only - I had given them this list to prepare; this was to jog their memory) and a space to take notes from the reading and video on the other side.

The procedure was basically the same as the first. I did not add any new vocabulary, but there was a new reading and a new video. The only major change was that I gave the observers tally sheets where they could track the contributions, i.e. gave details, asked a question, invited someone to join, used English words. I had also divided up each class strategically - in one, I put those with stronger oral skills together, in the other, I separated students who tended to talk a lot during discussions.

Here is a selection of comments provided by students after all 3 Harkness tables were completed (apologies for the format, not sure how to change it):

I was very pleased with the outcome, and the students were so proud of themselves! They couldn't believe that they could hold a discussion for that length of time in French! As I mentioned to them, #thatwasn'tsoawkwardafterall!

12 thoughts on “Things are going to get messy…”