We are now into week four of this History adventure and there have been some ups and downs…some moments of sheer brilliance and some moments of “what the heck was I thinking?” But like anything in the life of a teacher, you win some and you lose some. Here are some highlights from the last few weeks of trying to be more experiential with Grade 7 History.

What it was: After their pre-learning, the girls scattered throughout their school, cell phones in hand, and completed a scavenger hunt all about the people of New France.

Why is was great: The novelty of having their cell phones actually permitted in class was a riot! They loved the independence of running around the school testing out their learning and working as a team to answer questions and challenge their learning.

What wasn’t so awesome: I don’t think this was “experiential learning” as much as just active, fun, and novel. Which is important, but the actual deep learning wasn’t so present. 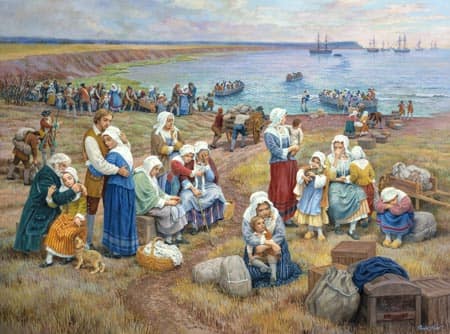 What it was: Inspired by this little gem I found over the winter break, I started the class in costume (as an Acadian woman, Madeleine, of course), welcoming them into my house. I was gathering all the women together from our town to decide what to do about all the men being locked in the church for 3 days. After some discussion about what to do, I left the class (to milk my cow…who else is going to do it), and returned as a British officer. I took them down to the church (chapel) and they became the men of Acadia, having to decide whether to sign the Oath of Allegiance. The students then debated back and forth about why they would sign and eventually had to make a decision.

Why it was great: The students loved being thrust into a character. Some really got into it. They also commented the they really liked having to make those hard decisions themselves and they developed more empathy for what the Acadians went through. I could also refresh the information from their Independent Learning (homework) in character and they actually developed a deep, complex understanding of this chapter in History.

What wasn’t so awesome: While it’s a lot of fun to be in character, it’s also exhausting. Most of the students went along with it, but some were a little sly and kept asking why we weren’t speaking French if we weren’t in Acadia? Ha ha!

Week Three: Battle of the Plains of Abraham

What it was: We reenacted the famous battle that decided the fate of New France.

Why it was great: The students totally got into it! They loved the dramatic death scenes, acting it out, and having their peers play key roles of the important characters. It was a nice day outside and playing around in the fresh air was a welcome change from the classroom (so was being in the chapel last week, for that matter).

What wasn’t so awesome: The questions on their weekly check-in quiz were centred around the aftermath of the battle, not the actual battle itself. The information from the experiential part of the learn was stickier, so students often reverted to using this information on the quiz (even if it didn’t actually answer the given question). I realized that whatever we do in the “Playing History” day is going to have a more lasting impact than what the students read or discuss in class.

Later today, we will go through a Loyalist simulation that is one part “Octopus” and one part “Mafia”. Stay tuned on the learning moments from that experience.

School as exciting as an amusement park?

Can this be a reality?

Should this be a reality?

Truthfully, I don’t have the answer to either of those questions, but I did leave the second Face 2 Face with a clear direction for my action plan this year: how can I make Social Studies (specifically History) a novel, exciting, and entertaining experience for young people?

A bit of background on my background. While I love learning about History and Geography, my area of expertise is undoubtedly English and Drama. I studied Drama for four years, which by extension, I was also studying literature as well. But for that matter, the study of Theatre is also actually a master course in History, just through the lens of performance. There is no better way to understand what was happening in Russia during the turn of the century than by studying Chekhov!

This said, teaching Grade 7 Social Studies has been a welcome challenge. Last year I feel like I was just getting the hang of everything. This year, with a tiny bit of experience, I feel like I can push myself to try new things. Also, there were times last year where I was getting bored with what I was teaching, so I can imagine my students were just on the verge of poking themselves in the eye with a protractor.

So this past month, I asked myself and my fellow Cohortees how I could make Social Studies as exciting as an amusement part (without the vomiting). It’s not so much that I want to make every class an unbelievable experience (who can sustain that?), but I want to increase the novelty, make my students excited to come to class, surprise them a little each day, and have us all collectively step outside of what we expect school to be like.

The ideas that flowed from my partner @mjohn, as well as the other friends who posted a sticky note fertilized my thinking on the topic and help me narrow my ideas down.

But what I really needed was the space of the winter break to process everything. I don’t know about you, but I have found it really hard to engage in the creative side of teaching when I am just trying to keep my little head above water. We teachers are actually artists and we need the space to process ideas and make our visions a reality.

So that’s just what I did. Cuddled up by the fire of the cottage, I wrote down about 10 different incredible ideas and planned out how I could incorporate them into how I teach History this term.

How It Works: Each week we have a class devoted to “Playing History”, which is the amusement park of our learning. We will go on scavenger hunts, walking tours, role plays, re-enactments, play games in character and so on. One class a week will be devoted to the background learning and another class (or half class) will be centred around checking the learning / understanding.