“Hanging In: Strategies For Teaching the Students Who Challenge Us Most” by Jeffrey Benson (a book review)

Whether or not you teach in a school with students who could be labelled as “challenging”, reading Jeffrey Benson’s “Hanging In” will prove to be time well spent, as any teacher can learn from the gut-wrenching and heart-string-plucking stories in this 180 page, 2014 text.

This book was my final check mark on my “required summer reading” list and I was impressed with how invested I became with the stories and the characters Benson introduced. Each chapter focused on a different student (names and specific details altered to protect the students’ identities) or pairing of students whose stories exemplified a different challenge Benson and his team (at a school for students who typically struggled in traditional educational settings) experienced. It is equally surprising and refreshing to read not just the success stories of his team, but also the raw moments of failure and Benson’s humble analysis of what went wrong for the students that he didn’t effectively reach. More professional resources should acknowledge our failures (big and small), as we all know that everything doesn’t always go as planned or hoped.

From “Hanging In”, I am reminded of the importance of relationships and students feeling truly seen and liked in order to be willing to be pushed by their teachers. But deeper (and perhaps more important) than just the relationship, Benson cautions against teachers counter transferring onto their students (transference is when a students sees a teacher as their parent, so counter transference is when the teacher starts to see the student like their child). In other words, develop close, caring relationships with your students, while still being mindful of the power of projection. Moreover, after reading this book my belief in the importance of working on a supportive team has undoubtedly been strengthened. Those stories where teachers collaborated to understand a student better or looking at a challenging student through their curricular strengths really helped me feel immensely grateful for the kind of teaching team that I am currently on.

This book will be an important member of my bookshelf for years to come and will certainly be covered in sticky notes and pencil markings in due time. I imagine that if we work together, at some point in our relationship, I will loan this book to you, as all teachers can (and should) learn something from these stories. 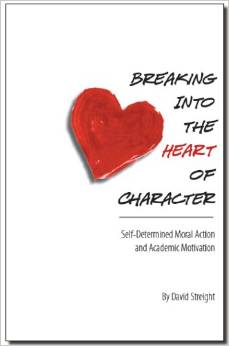 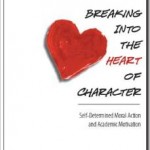 This text was as useful as it was brief. This 104 page manual on supporting character development in schools was a swift, enjoyable read that helped refresh my perspective on teaching and mentoring young people. Truthfully, I might not pick it up off a shelf had it not been on our summer reading list. I might have thought that “character education” was not a focus professionally for me right now. Or I might have said to myself that there surely must be more important books to read on my precious summer days (exactly the same rationale has made me put off reading Harry Potter, actually). But David Streight’s book helped reconfirm why I am in this profession: the hearts of young people matter.

I spend a significant amount of time wondering what the point of school really should be (and really is) and what roles a teacher and a student play in an ideal situation. David Streight makes a great case for why character education really does matter (or really should matter): our minds are not disconnected from our hearts or our hands. We are educating whole people and, “When the needs are effectively filled, learning and memory are more efficient (Neimac & Ryann, 2009; Reeve et. al., 1999; Reeve, 2006)” (p. 23).

It was hard to not see myself and my colleagues in the stories offered on these pages, or find myself nodding in sympathy with Streight’s message. The wisdom offered in “Breaking Into The Heart of Character” is so straight-forward and logical that I wanted to find a time machine and give the first year teacher version of myself a copy to avoid some of the obvious pit falls and set backs that most fresh teachers make.

Or better yet, this book should be on every new teacher’s reading list to prepare for the task of teaching young people how to be human. If you know a friend who is starting to teach, do them a favour and put a copy of this book in their hands. They will thank you for it…or maybe their students will instead.

The Price of Privilege by Madeline Levine (a book review)

A slight confession: I wholeheartedly admit that when I saw the book “The Price of Privilege” on our reading list, by Madeline Levine, I was in part hoping for a book that would pick apart the devastating effects of power and affluence in white communities and how this privilege not only affects those people who are oppressed, but also the negative affects of those who wield this power and how it affects children academically. I was excited. I was ready. I was looking forward to having my ideas blown wide open.

Sadly, this was not that book.

While I admit that there is a wealth of useful information in this book, and that some parent might stumble on this book and gain insight into some of their child’s issues, as an educator, there was nothing new or revelatory in this book that I didn’t already learn from reading Barbara Coloroso’s 2002 book “Kids Are Worth It”.

Despite this criticism, I found myself highlighting great one liners and bits of wisdom. Madeline Levine definitely knows what she is talking about and could certainly be a great source of inspiration for many weary parents. Her message is pretty clear and undoubtedly useful: Set limits for your children. Be firm and flexible. Cultivate warmth. Practice containment. Understand the difference between being in control and being controlling.

This all makes me wonder though if this is not actually a message for affluent parents and just for parents in general. Are the problems of affluent parents really that different from parents from average SES backgrounds? It seems that the beginning of the book, Levine is almost defending the notion that affluent families have problems too and are worthy of her care and attention (poor little rich girl syndrome). While I know that affluent families have complex, challenging situations of suffering (because affluent families are comprised of humans and humans all suffer), the challenges that Levine describes seem like less to do with affluence and more to do with living in the modern industrialized world.

I did not grow up in an affluent family and many of the plagues Levine described are variations on a story I experienced when I was child.

Short story long: privilege is not just something owned by the wealthy. Levine could have really explored what it means to have “privilege” and other ways of being “affluent”, other than just having a well endowed bank account. Perhaps the “price of privilege” is not something that only wealthy folks have to pay and is something that has more to do with being white, living in a developed country, and being of a certain income bracket (a much lower income bracket than Levine suggests). Which begs me to question if the solution is not merely the prescription offered by Levine on these pages and should also include a consideration oppression, identity, and how these interplay with privilege.

Despite my obvious disappointment with this book, I enjoyed the quick, useful read and will keep it on my shelf, perhaps referring to when “Kids Are Worth It” is slightly out of reach.