Over the past two years my main focus has been essentially one thing: feedback! How can I leverage student feedback in the English classroom to improve my teaching, to create a more student-centered environment, and to allow students to communicate their learning to me in a manner that offered differentiation and promoted collaboration?

Those are some big goals, and I find myself turning to tech tools with SAMR and TIM models in the back of my mind to engage and promote inquiry in my classroom. Focussing for this blog post on my AP Language and Comp class, a grade 11 class, I have had some luck using two particular tools: the new and improved mini-Kaizena feature on Google Docs and of course, Twitter.

First, let’s look at Kaizena. The assignment: students were asked to choose a topic that inspired curiosity in them and to write a non-fiction opinion piece. Our study of rhetorical modes and devices throughout the year meant that they were required not only to employ those tools in their own writing, but I wanted them to outline what tools they choose and how those choices allowed them to achieve their purpose with a specific audience in mind. In the past, students submitted a typed outline where they filled-in a table and described paragraph numbers and rhetorical devices that they had employed, but the descriptions lacked depth and the learning wasn’t jumping off the page for me. This year, students did the same thing but instead of writing out their rhetorical choices, they used colour to highlight the sections in their google docs and then inserted Kaizena voice comments to describe their rhetorical choices. In an instant, I could see that students were going far deeper, explaining not only why they used a particular tool but how that tool allowed them to achieve their purpose. The second half of that equation was always missing in the past. Students did have some tech challenges, and when Kaizena went “down” the night before the assignment was due, many students showed resilience by finding alternatives — many simply inserted their explanations using the comment feature on Docs. Either way, for this assignment, students had the choice of topic they would write on, could use colour to categorize their different devices, and finally, they could use their oral communication skills to describe their learning in greater detail. What a great tool. 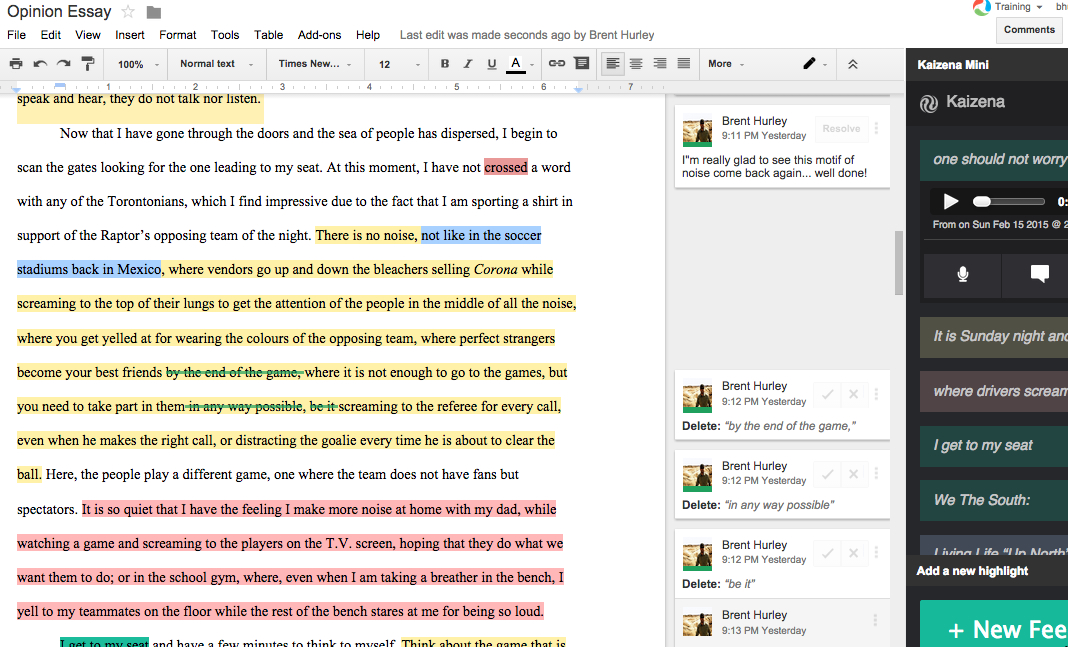 Students using Kaizena to explain their rhetorical choices in an essay

We are also using Twitter as a backchannel in our class during our study of “Who’s Afraid of Virginia Woolf?”. The notion that digital natives are more able and willing to employ this technology is, in my opinion, a myth. Kids have been taught for years of the dangers of social media, and I have observed initial reluctance to use the tool. That being said, with a little encouragement (I’m giving some marks for Tweets that make big picture connections between text and self and text and world) students have been using the tool as a backchannel. The night before writing an in-class prompt, students pose questions to their peers using our hashtag, #HurleyAPEnglish. Questions about character motive, themes, and connections to everything including the film Gone Girl have been tweeted. Using Storify, students can see both of my sections’ tweets collected in one place and they can then identify trends. One hockey player who was missing class due to an away game was tweeting from the bus on his way to Lake Placid! That type of engagement never would have happened before. When I hear frustrations from kids like, “140 characters just isn’t enough, Mr. Hurley”, it gives me the opportunity to talk about the power of choosing the right words for the right moment and simplicity. One student even posted a link to her google doc essay and asked anyone if they could help her with peer editing. By the time I found the link, she already had three students who had seen the tweet providing editing help. 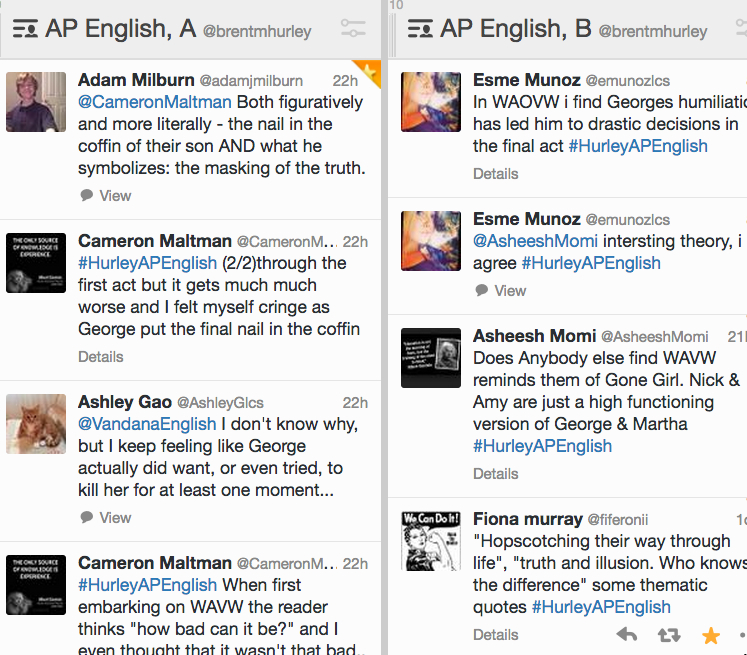 When I think of the power of technology to transform my classroom, I come back to these two tools and the opportunity for students to engage, collaborate, ask questions, and to direct the learning that happens in the classroom from the ideas they share outside of the classroom, whether it’s the back of a hockey bus or at the lunch table. As for my action plan, it’s still a work in progress. Thanks to @DerekDoucet1 for encouraging me to write this post. Please feel free to share how you might be using technology in your English classroom to engage your students.

5 thoughts on “Tech in the English Classroom: How Kaizena and Twitter are Game Changers”