Recently, I attended a Webinar led by Jason To called “What Does Anti-oppressive Mathematics Education Look Like?” I can say with honesty that it was one of the most thought-provoking PD sessions I’ve seen in awhile, and I left with a renewed desire to do more in my classroom to be more equitable, to make students more aware of social justice issues, and to encourage more critical thinking and discussion.

He talked about thinking classrooms in math, and the benefits of using vertical, non-permanent surfaces to encourage deeper thought, collaboration, and increase willingness to take risks. He introduced us to the Timeline of Mathematics from Mathigon, and how we might use it in our classroom to investigate the history of math, and the people involved. He also posed the question, “how might we use math to shed light and take action on social justice issues?” 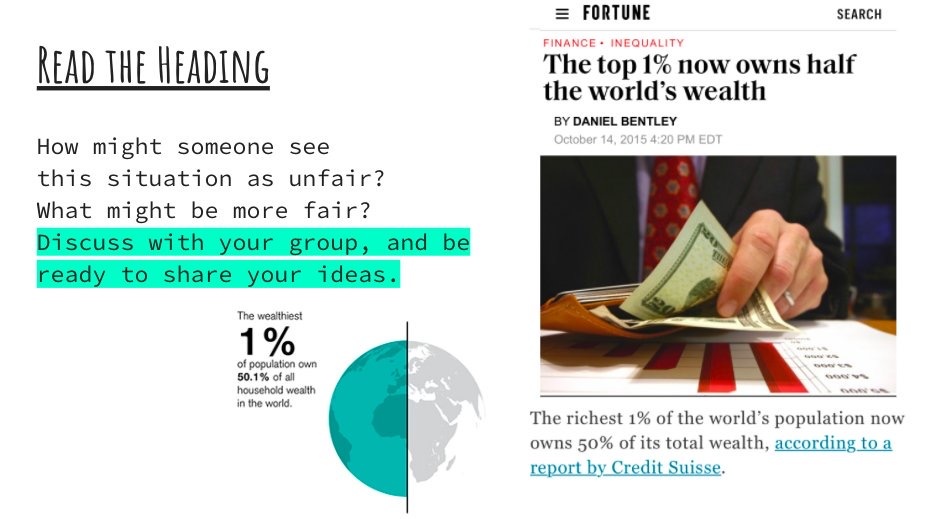 So for one of our morning math chats this week, I wanted to encourage some productive discussion, while fostering strong mathematical literacy skills. I put up this slide, made random groupings, and had them discuss and share their ideas.

I was ready for a straightforward lesson, with (hopefully) some meaningful discussion. I’ll be honest - this absolutely did not go as I planned. In the words of Outkast, “You can plan a pretty picnic but you can’t predict the weather.”
I was expecting at least some light debate in groups; some differing ideas. What I got instead, was the entire class agreeing that this was totally fair. “I see no issue with this.” “They worked for their money.” We discussed for a bit, but after every group essentially agreed with each other, I’ll be honest, I was left speechless. Did they not understand the math in the title and what it means? Is empathy a lost concept? So I told them to remember this article, and that we would come back to it. I needed some time to think how I was going to approach this in the best way.
I went home, and the brainstorm began. I needed to make this applicable to these kids. I wanted to get through to them somehow - to broaden their views and perspectives. But how?! What interests 14-year-olds? Boom. Candy. Of course.
I journeyed to the store, and bought a plethora of sweets that could probably make your teeth hurt just looking at them. I was ready. I started class the next day as usual, and then told them we were going to do an activity. I told everyone to draw a card, and make sure not to show it to anyone. They were curious about the mystery of the cards, and what was going to come next;  I had them hooked in. Then, I pulled out my bag of candy - cue the eyes lighting up. I walked around individually to each desk, and asked them to show me their card. The first few got 1 or 2 candies each, depending on whether I said “oh, that’s a great card!” or “That’s an alright card.” Some students got no candy, “oh sorry, your card isn’t good enough today.” There was some confusion, and some quiet disappointment from students. The volume in the class increased as I approached on students desk, and began counting out candies and forming a substantial pile of goodies on his desk (50% of the candies I had to be exact.) The outrage as I piled the candies on his desk one by one was palpable. I collected the cards, and then started right into a lesson on solving equations. Obviously, we didn’t get far in that lesson…
I had students telling me how unfair I was being.
“Why did he get so much candy?”
“Why didn’t you give me candy, I had the same card as her!”
And then, after about 5 minutes of questioning and yelling, I hear from a student in the back - “wait a minute… does this have something to do with that question you asked us yesterday?”

Aha! They got there. So we came back to the question I posed yesterday. I reminded them that they all said this was totally fair yesterday, but I just demonstrated the same numbers and they were outraged. Why is that? Could we see why someone might think this wealth disparity is unfair now? We looked at the global wealth pyramid , and discussed how to interpret the graph, and what it meant. We also talked about the concept of wealth, and how it can be difficult to put into perspective. I found a video (I believe it originated on TikTok, so they loved that), of a man using grains of rice to put amounts of money into perspective. Specifically, he shows Jeff Bezos wealth in grains of rice, where each grain represents $100,000.
This led to some really great discussion, and some eye-opening conversations from what I could tell. I won’t say it was easy. They challenged me a lot, they asked me difficult questions, they debated with me and each other. They accused me of making up the wealth pyramid (don’t worry, they believed me when I showed them my source. It probably would have been a lot easier for me to just teach them about solving equations. I don't think most educators decided to be teachers because it's easy though, just like I don't think most math teachers teach "just math."

Now, being a teacher in a private school, there is undoubtedly an immense amount of privilege in a lot of cases. If I can help make some of these young adults aware that this privilege exists, and perhaps build empathy and compassion in a few of them - well that’s a start. I think my biggest takeaway from this whole experience is that math class can absolutely be a place where issues that we might not think fit into math curriculum are discussed. I realize this is a very small step in answering the question “how might we use math to shed light and take action on social justice issues?”. However, I'm a firm believer that a small step is always better than staying stationary.

I want to give a big shoutout to Jason for his inspiring PD. He shared another idea looking at police carding in Toronto, using statistics, probabilities and ratios to invoke discussions about racial profiling and "fairness". I plan on using a version of this in my classroom in the future!He also left us with a great reminder. "Continue to learn and unlearn. We will never know everything, so the process must continue."

So on that note, cheers to trying new things. Cheers to stepping out of our comfort zone. And cheers to unlearning.

2 thoughts on “How might we use math to shed light and take action on social justice issues?”