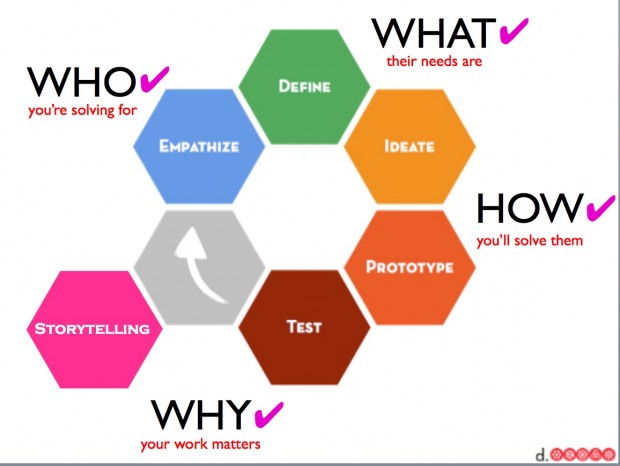 It’s been a while since I blogged, but I promise my action plan hasn’t been far from my thoughts. My course load over the past two years has been primarily math-based, so I chose an action plan that concentrated on math. See my last blog post for an overview of my action plan. However, I really love teaching Science as well and wanted to share a success story I had when using Design Thinking, a concept introduced to me during the second (my first) F2F.

I’ve been working all year to develop and foster a sense of wonder in and love for scientific ideals in my Grade 6 Science course. This is my first time teaching this class. Some people bemoan new preps, which is understandable as there is a lot to be said for having a base of material to build on and refine. I’m sure I’ll see the value in this even more when I’ve had some experience with re-teaching – however, over my short career, I’ve only re-taught one class. SO, for the time being, building new courses is exciting and yet still familiar to me. I knew I wanted to make each unit inquiry- and project-based. I wanted students to explore their own intrinsically motivating questions and curiosities using the Scientific Method (Question, Hypothesis, Experiment, Analyze Results, Refine, Conclude). I also wanted them to explore the considerable breadth of resources available to them to answer questions they wouldn’t be able to reach conclusions on via experimentation.

With this “interest-led” mentality, we began our first unit, which I titled Scientific Investigation. The end project  would be a science fair-type presentation, highlighting the application of the Scientific Method to a specific problem or issue each student chose. I began by giving small groups of students random materials, for example: worms, flashlights, a box, and a mirror. The students were to generate a question, design an experiment, conduct the experiment, and analyze their results to generate a conclusion). Although the project was overall quite open-ended, it was very structured in its execution. It went well and the students gained an idea of the scientific method and its value.

From here, we moved into the planning of our Scientific Investigation, or science fair project. Students worked individually to develop a question, generate a hypothesis based on previous knowledge or research, and form an experimental design. This section of the project was fairly structured and I conferenced with each student to ensure their projects and ideas were testable. For grade 6 students, this idea of a question being “testable” was difficult to grasp. I had one student who wanted to see if dinosaurs were evolutionarily similar to birds, and another who wanted to see if the price of a pair of basketball shoes was related to their performance (we had a hard conversation about the practical meaning of “performance”). Once their questions were ironed out, they set out to conduct their experiments. This is where we hit a snag.

I’m going to blame my lack of experience with this age group, but I overlooked the fact that these kids needed much more guidance than the students I regularly teach. I mistook enthusiasm and willingness for surety in the process. Many students did a great job carrying out their experiments and analyzing their data. A few, however, did not. They didn’t take the feedback and conclusions we had agreed upon during our conferencing and apply it. In other words, they missed the “reflective” piece of the process and plowed ahead anyway. This was a learning experience for me and I knew we needed a more structured process to ensure ideas were being followed up with tangible plans and outlines.

It was several weeks after reaching this conclusion that I attended the second F2F and was introduced to Design Thinking. I loved the idea of using a very structured method, or protocol, to solve problems or at least examine them in a creative way. I loved the collaborative nature of the process. And I loved that I could make the process immediately visible and tangible for my kids. 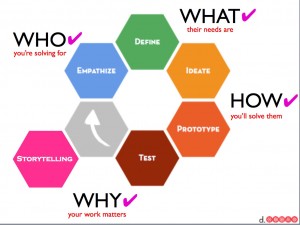 We had already decided as a group that our final product for our Matter and Molecules unit would be a Bill Nye-style video. I decided to make a Design Thinking-based template to guide them in the planning of their groups’ section. I printed this set of documents on 11 x 17 paper and we worked through each section of the process; Empathize/Define, Ideate, Prototype, and Test. The students got feedback from me and their peers after each step.

Their final products were much more organized and coherent as a result of this planning tool. It really forced them to refine their ideas and focus on the concept they needed to teach and explore in their section of the video. The kids loved the process and appreciated the extra structure – it really allowed them to organize their thoughts. I’m considering using it as a template for the Internal Assessments my IB Math students write at the end of this year.