Like most coaches, I breathe a huge sigh of relief when the season comes to an end. I love coaching my team, but it is a huge commitment that can mean long days and time away from my family. The snowboard season is no exception. Although we don’t have late games that follow a long day at work, we do have very early morning bus rides and a lot of full days away from school, which means writing lots of coverage and missing important meetings and work time. But most of us would have it no other way.

Sometimes we might wonder if it’s worth it. Does the benefit of the athletics experience for the students outweigh the costs of the missed class time? In my personal experience, especially coming off the end of this particular snowboard season, I would answer that with a resounding yes.

The CISAA snowboard league is a league like few others, I believe. Somehow, and I’m not sure how it was created, there is a true sense of community that exists amongst the athletes and the coaches. It was there before I became a snowboard coach and it continues today.

There are few other sports that run in the same way as snowboarding does. Alpine and nordic skiing, swimming, and track and field are the few that come to mind. Most regular season athletic competitions at our CIS schools consist of two teams meeting for an individual game or match. Think hockey or basketball. Instead, with snowboarding, at each weekly event, all schools are present together. The coaches are together on a weekly basis to run the events, we have a coaches’ meeting the morning of every event, and we often eat lunch together. This provides us with the opportunity to get to know one another, and it is something that I value so much. I feel a huge sense of community amongst the snowboard coaches, and this extends even to the athletes, who, despite competing against one another, seem to really support one another. This season’s OFSAA experience underscored that to me, and I thought it was worth sharing.

The Snowboard Cross event, although not technically part of OFSAA yet, is a great first example. Because the sport is so new, the provincial championship event runs not with school-based teams, but association-based teams. Each athletic association is able to send two teams of four females and two teams of four males. While each association is free to select their representative athletes however they choose, CISAA offers the spots to the top 8 male and female GS racers, thus forming teams that are made up of a mix of schools. This year, CDS, GCS, and SMCS made up our combination of athletes. (Athletes from LCS and HSC, though some qualified, were not able to attend this particular event.) As a group, led by CDS coach Andrew, we warmed up, trained, and competed. Even the coaches got in on the action, forming a coaches’ team to compete against the coaches from the other associations! (I thought I was going to die on the Craigleith Bowie Cross Track that day, but happily I survived with no serious damage inflicted.) And the results were impressive: the first CISAA girls’ team took gold, while the first CISAA boys’ team took third place. It was a privilege and a moment of pride to watch these athletes from various schools come together, work together, strategize and compete as a group, all representing CISAA. 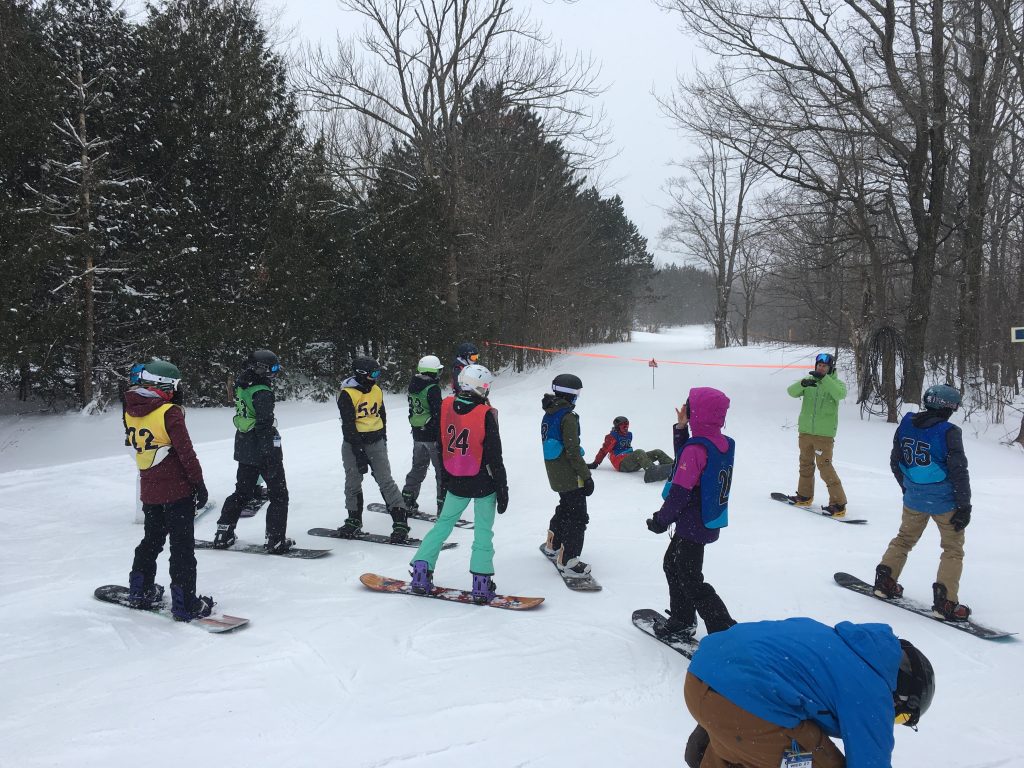 Athletes from CDS, GCS and SMCS warm up before training on the Bowie Cross Track at Craigleith on Feb. 27. 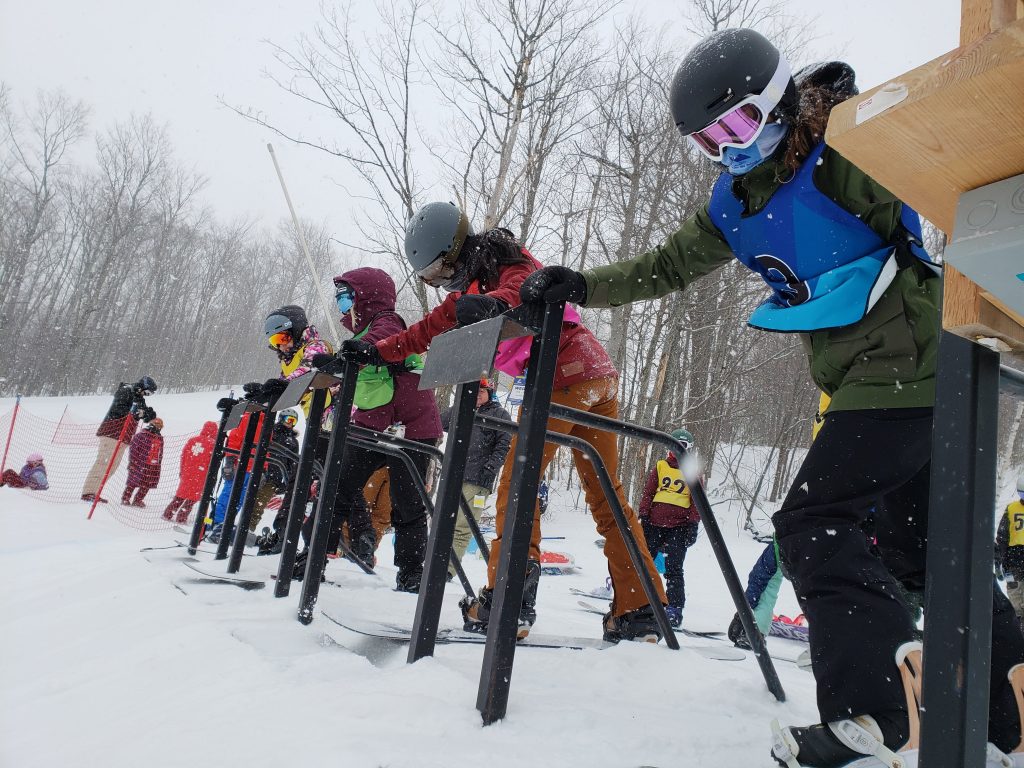 CISAA’s 1st Girls team, made up of athletes from CDS and GCS, prepares to race at the Ontario High School Boardercross Championships on February 27. This team ended up taking first place! 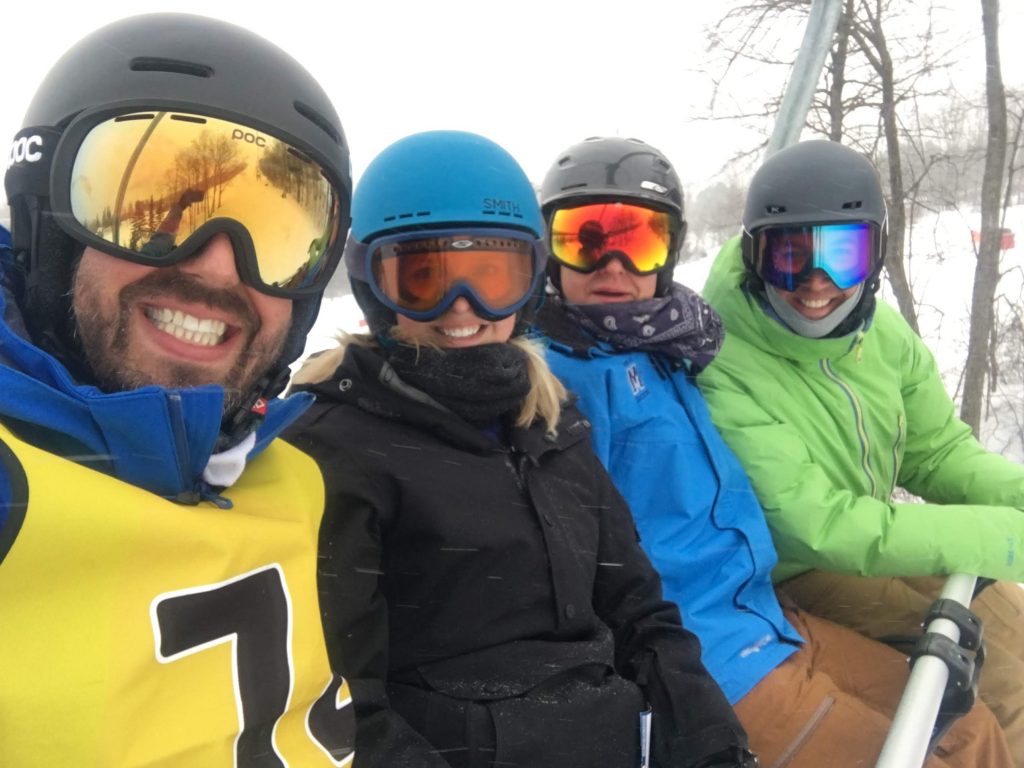 The impressive CISAA coaches’ team (who took second place among the coaches, with absolutely no help from yours truly!)

That evening, the CDS team gathered for a team dinner. Or, I should say, it was supposed to be a team dinner. But the Sward family – a former CDS family whose two children were instrumental in getting the CDS snowboard team started several years ago – opened their home to not just all of the CDS athletes and their parents, but to all of the CISAA athletes and coaches who were up in Collingwood for the night. The result: a beautiful evening of #CISAAfam celebrating the almost-end of another snowboard season together. Coaches, parents, athletes, and even an athletic director breaking bread together in the spirit of community. It was an unforgettable evening, and it really underscored the potential for athletic endeavours such as snowboarding to create community.

Being part of the CISAA Snowboard group of coaches is such a highlight for me. It rivals Cohort 21 with regards to the supportive collegiality and the sense of belonging that I get from it. Here’s to another successful season behind us and, I hope, many more to come! 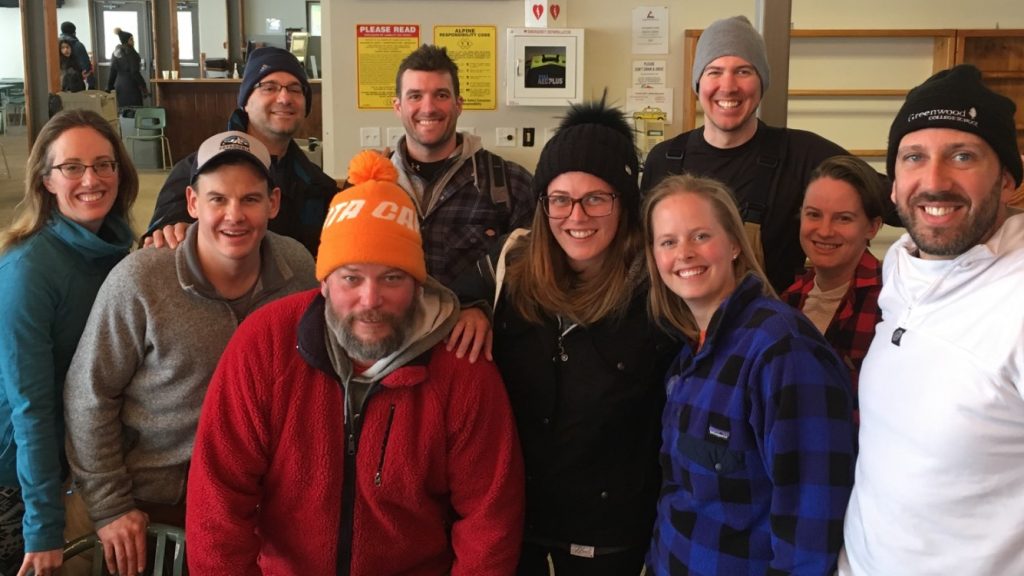 Coaches from CDS, SMCS, LS, GCS, and RLC celebrate at the CISAA Championship on February 20. (We missed HSC and half of RLC in this photo, unfortunately!)