Find me on the web 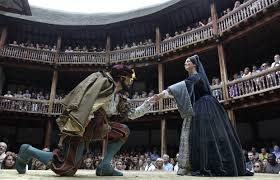 NOTE FOR NON-ENGLISH TEACHERS: Please don’t be put off by what appears to be English heavy content. My needs are far reaching!

It’s an age old struggle for an English Teacher: I love Shakespeare and the kids hate him. Worse still, I understand exactly why they hate him. I hated him too. Passionately. Actively even. And so, this is the ongoing discussion throughout my career (notice my defiance).

I’ve taught Shakespeare to kids in South America, North Africa, The Middle East, Ontario and now the Maritimes, and this exchange has varied little from year to year. Last year, the conversation climaxed when a ninth grader threw a copy of ‘The Merchant of Venice’ from my 3rd story classroom window, striking a science teacher in the head (this really happened).

I should say my general approach to Shakespeare in my class hasn’t necessarily been driven by my defiance. My defiance, I think, is born from a belief that my classroom is somehow different. My approach to Shakespeare doesn’t resemble my high school experience, because I’ve tried everything and my high school teachers, beyond sitting in rows reading, tried nothing.( Actually, that’s not quite true. Some teachers, in some inspired homage to the 1950s would ask us to memorise famous speeches and then recite them beside their desk as they made ticks on a sheet of paper deducting grades with every stumble.) Anyway, each year, it seems, begins with the enthusiasm of a new innovation in terms of experiencing Shakespeare as well as expressions of learning Shakespeare. And this makes my students experiences with Shakespeare vastly different from what my own were. Except, of course, the outcome is basically the same:

They are tortured by him!

(This is hard to admit, but, at times, I’ve even sunk to shifting my perspective: “OK, so they hate him. No matter what, they’re going to hate him. They’re supposed to hate him. At least I’ve provided meaningful and lasting engagement that will finally resonate at that more mature moment in life when it inevitably hits them that they do, in fact, love Shakespeare. At that time, a time when they will barely remember my name, they will thank me.” And, of course, I’m forever buoyed by the inevitable few – a very tiny minority – who decide they love him: “See,” I reassure myself, “I’m doing something right.” All of this represents a kind of cop out.)

In more recent years, I’ve found myself adding something peculiar to the conversation.

Me:                     OK, of course you find him boring. You know, I’m pretty sure that when Shakespeare was imagining these plays he didn’t intend for a bunch of high school students to be sitting around reading them from a text. They are plays! They are meant to be performed and experienced in that way.

Indeed, I have used performance in my classroom. Over the years, I’ve used it in all kinds of ways: dramatic readings, contemporary retellings, even performances of short scenes. This is, I have learned, an effective approach to Shakespeare. It adds a layer of interpretation forcing a deeper and more meaningful engagement with the text. It is through performance that Shakespeare’s language finally begins to reveal itself and, in some way, resonate. The overall level of student engagement is high when performance is the focus. If students are to in fact thank me later in life for exposing them to Shakespeare, it will be because I asked them to perform it. I firmly believe this.

Well, this marks yet another year of “teaching” Shakespeare and, with it, yet another innovation. But this year’s different!

This year’s innovation builds on the concept of performance. No, it flips the entire approach to Shakespeare by emphasizing performance. Until this point, performance, within any study of Shakespeare, has been a mere element in a larger goal of teaching the text. And oh my goodness, do I ever hate admitting that! However, with this confession I also hope (and goodness do I ever hope!) I’ve identified the single biggest factor in the student’s dread of Shakespeare. No matter how many innovations I’ve thrown at the wall, my general approach has remained. I have, throughout my teaching been determined to bring the students to larger understandings of the basic elements of literature within Shakespeare: theme, character, specific stylistic choices, plot even. Really, the end goal in my classroom has been for the student’s to be able to compose formal, literary essays. Sorry, why do the student’s hate Shakespeare?

(Isn’t this by far the most difficult part of truly and meaningfully changing what’s happening in the classroom? Being truly honest about what it is you’ve been doing and the effect you’re actually having on learning?)

So this year, in my tenth grade class, the students are performing! I mean, I still “teach” the text but this is something closer to modelling (to borrow from Kelly Gallagher’s ‘Readicide’) rather than an insistence on full comprehension. From time to time I select a key passage or exchange and I’ll model my approach to interpretation and analysis. The students, meanwhile, are primarily focused on the larger and daunting goal of performance. In the spirit of PBL, the basic idea looks like this:

Broken into groups of four or five, students create a five to ten minute performance of an important (or memorable or particularly entertaining) moment, any moment, their choice, from ‘The Tempest’. Within each group (or company) are particular roles: lead actors, director, designer. The company creates an identity with a name, logo, slogan, and mission statement. All of this is posted on the company website where each member maintains a blog (various prompts for reflection are provided throughout the experience). The company has a twitter account. There’s a research element where each member creates an annotated bibliography of sources that might inform their artistic choices. Final performances occur in the theatre before a live audience. My absolute favourite piece of this entire project is that the Grade eights are making documentary films of this entire process (hilarious!).

It’s been roughly three weeks since I’ve introduced the project and we’re now four weeks from final performance. It’s going OK, but here’s what I would love to know from all of you:

5 thoughts on “Mistaken Identity: Shakespeare in the Classroom”