These past two weeks have been a prime time for Educonferences – there was a great one at St. Clements in Toronto, The Klingenstein Summer program in Lawrenceville, and of course the ISTE 2014. But I was at none of them…or was I?

I have colleagues who attended each of these conferences, and we were able to share insight, contributions and concrete take-aways through twitter, instragram and blogs. For example, Charles Jennings was at the St. Clements Summer Institute for History with Eugene Henry. Adam Caplan is down at ISTE 2014 as well. Also, Leslie McBeth & Aaron Vigar were down in Klingenstein, and they wrote thoughtfully, and fully about their big take-aways. Aaron has been writing about how his experience has allowed him to take a step back from his immediate role of teacher and see education in a bigger context HERE. Leslie has been writing about the content and its impact on how she will move forward in her own teaching and leading of teachers HERE. 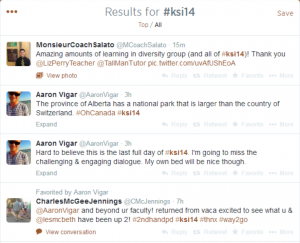 Some of the tweets from Klingenstein 2014

We were also sharing ideas and resources through Twitter. So, in many ways I was in attendance – I was micro-attending through these social media pathways.

One of my favorite tweets is from an actual colleague Charles, who writes that he is looking forward in reviewing all that was accomplished (i.e. archived) through Twitter at Klingenstein. The conference extends beyond the attendees and the time period…

I have also been watching, with jealous eyes and twitchy text-fingers, the goings on at ISTE 2014. Just follow the #ISTE2014 and you come across a wealth of inspiration and resources. Yes, I have colleagues there too, and yes, we are sharing our insights, resources and, I’ve even been able to contribute to some of the discussion via Twitter. All of this while sitting in Toronto, ON.

So why attend a conference at all?

While micro-attending is a great alternative, I believe that nothing 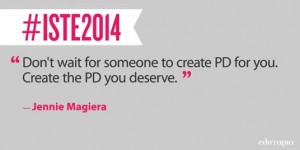 can replace the power or the connections, as well as the importance of being embedded into the culture of such powerful professional development conferences as Klingstein and ISTE. We have all communicated over Twitter and have great PLN communities – but these need to be nurtured. The positive culture, the willingness to engage doesn’t just happen. It is created from these moments of connection.

These tweets speak for themselves. That while there, the attendees are experiencing a more meaningful shift in their practice while they build connections. Maybe it is seeing others do it that give them confidence? Maybe it is seeing something new firsthand that they can better modify it into their own practice? Or maybe, it’s being around other people who are so excited, so open to changing their practice, that the culture of ISTE is becoming a part of their own disposition to their practice?

There is something that is happening at these conferences that I am not a part of. Whatever it is, I don’t get it from just micro-attending…

So, as I read about my colleagues and try as best I can to be a part of these great experiences, as the saying goes #wishIwasthere…