Get the bread- let’s do it

High key- opposite of low key

Real talk- to be honest 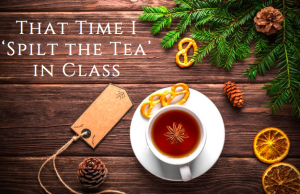 I’m about to spill the tea on a real moment that happened in a senior English class last year. Before you wig, I only keep it 100 in this post, so there’ll be no shade in this story, which means that no one should get triggered. If you’re up for it, let’s get the bread!

In an AP English Literature and Composition class last year, wherein I was teaching the students how to make fire annotations, I noticed one of my students going full send with her notes. Upon closer examination of her writing, I noticed three letters in big capitals: TEA. I immediately showed my age and was low key embarrassed of how out of touch I was with Gen-Z lingo. High key: I had no idea what tea meant and had to be woke by my students who informed me of its definition. Collectively, my students proceeded to flex on me by sharing other variants of the English language to which I was not privy.

Real talk for a second; I understand that this post has been super extra thus far, so I’ll leave the lit phrasings to the students from here on out.

This was a truly memorable moment in my teaching career for a couple of reasons. Firstly, it was a moment wherein I was the one being taught language in my own English classroom. The students were eager to share their knowledge with me and quickly become the experts in the room. Secondly, that one student was genuinely completing the task at hand and annotated her text in a way that made sense to her. I always tell my students that there is no wrong way to annotate a text. I aim to teach them different styles of annotations that can help them make meaning from a work, but my messaging is consistent: the annotations should make sense to you. They are your annotations after all!

Most notably, though, that moment stood out to me because the student was applying her decoding of modern vernacular and synthesizing it with her understanding of a 19th-century text. At that point in the story, the character was, in fact, spilling the tea! As such, she was able to take a text from the early 1800s and contextualize meaning in a way that was relevant to her life.

To this day, I share this example with my students so that they know they have the freedom to craft their annotations to fit them as learners. The value of analysis doesn’t come from its rigidity or “correct reading”. Rather, that value is had when students engage with texts in ways that make sense to their lives and allows them, as learners, to make their own meaning. As an educator, I think that’s some tea worth spilling.

One thought on “That Time I ‘Spilt the Tea’ in Class”