Going in to Friday’s F2F, my HMW question was this: How might we engage always-busy faculty in meaningful and just-in-time PD?

To be honest, this question was not so much developed as it was pulled haphazardly out of my panicked brain fog in a desperate attempt to get myself together in time for the third F2F. I ended up having to leave the second F2F before it even began in November, and so missed the whole design thinking process that everyone else engaged in to arrive at their raison d’être for Cohort 21 Season 7.

I felt lost. So, in trying to come up with a HMW question, I figured I would focus on my new position as tech integrator. I knew I already had some PD sessions planned with faculty coming up, so perhaps I thought if I used this as my question, I would surely be able to declare this season a success without too much additional hard work. I don’t know. But arriving at the WE Global Learning Centre on Friday, I was not confident in my HMW question’s ability to survive some hardline challenging. And was I ever right.

For the “Five Whys” protocol, I sat down with the incredible @lbettencourt, and in the kindest and gentlest possible way, she proceeded to ask me “why” in such a way that it was immediately clear that I had not yet arrived at the right question. It very quickly became obvious to me that feelings of guilt and of not being enough were obscuring me from finding a HMW question that would actually serve to help me and improve my practice. We moved from a focus on faculty PD to conversations about busyness, balance and wellness. As it turned out, and as Lisa (my therapist for the day) helped me realize, my original question stemmed from a fear of not being good enough – in new position in particular, but also as a Cohort 21 coach, as a wife, and as a mother. I made my focus on faculty PD because I was worried that my colleagues and administrators at school might think I’m not doing my job if, by the end of the year, I don’t have hard data demonstrating the impact I’ve had.

My biggest takeaway from the day, besides the big burst of fresh energy that I got just from being in the same room with my tribe, was something that @gnichols said right near the end of the day

“Being in front of the right question is far more valuable than answering the wrong question.”

I may not be in front of the right question just yet, but I’m pretty sure I’ve found the wrong one. To be continued… 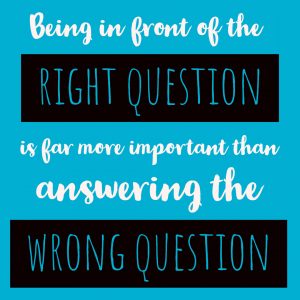 Thanks to everyone who asked questions, provided encouragement, and was engaged in the struggle of learning alongside me on Friday.