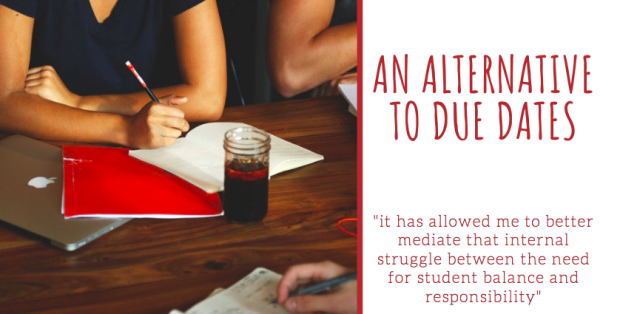 Of the many memories I have from high school, many come from my grade 9 physical education teacher. On several occasions, he would have us run the track out back of the school as a warm-up at the start of class. If it started to rain, we would start to whinge, to which he would kindly remind us, in his authoritarian tone, “you’re not made of sugar; you won’t melt, boys.” As a class, we appreciated his sense of humour and his level-headedness, even when things didn’t always go according to plan.

Another memory of this same teacher is his explanation of the “drop-dead date”; the due date, was, of course, the day in which an assignment was due. However, the drop-dead date, often a couple of days later, was the very last chance we had to get the assignment submitted. This gave us some flexibility as students and provided us with a couple of extra days to complete our work if needed. 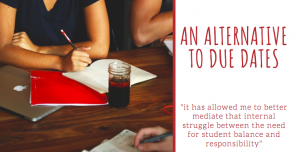 When I started teaching, I had a simple due date. However, I decided to change tactics after growing frustration with this model. For the past couple of years, I had modelled my own due date policy after this style. My terminology, due date and “zero hour”, was a little less morbid, and my caveat, allowing students to get feedback in between these dates, was less rigid. My hope was that students could aim to submit their work on the due date and then have until the zero hour to seek teacher, peer, or self-feedback, make any necessary edits, and resubmit as many times as needed. If it wasn’t completed by the due date, they would still have to make a submission but there was no sweating the unfinished work as long as it was completed by the zero hour.

Upon the zero hour, students would then submit their final work. If a student did not make a resubmission, I would simply mark their submission from the due date. As such, students knew that it was potentially high stakes if they waited until the last minute to submit the assignment as I would not accept late work. My aim wasn’t to try to ‘catch’ the late submitters but rather to give all students flexibility by providing an opportunity for feedback ahead of the final submission whilst still honouring the value of responsibility and organization.

Yet I still felt as though this process could be refined as I was dealing with an internal struggle of philosophies. One, understanding that, while being mindful of student mental health and well-being, all or nothing scenarios create unnecessary stress and anxiety. The other being the inherent value (and necessity) of responsibility, ownership, and studentship. Students knew that, as long as they contacted me a couple of days in advance, I would give them an agreed-upon extension, no questions asked. So to have a student who did not reach out, have incomplete work for the due date, not seek feedback, and then miss the zero hour seemed to me as though they were not meeting their commitments as a student. Of course, though, we don’t always know and realize the full picture when it comes to why a student did not or was not able to make a submission. As such, I continued to struggle with this battle of differences. I know that, currently, some colleagues simply accept late submissions from students while others are much more rigid. I’m not suggesting that one practice is inherently better than another, though I do think there is a value in both offering students flexibility and nurturing responsibility and time management within students.

Ultimately, I come back to the need for balance and the demands that are placed on students, particularly at boarding schools. That’s why, this year, I tried an alternative to due dates through a ‘publishing week’. Firstly, I wanted to rebrand the notion of something being due, which has come to have negative connotations for students. Instead, I refer to it as publishing because that’s exactly what writers do: they publish their work and can feel proud of their efforts. I can’t take full credit for this terminology, as I’m sure I heard it in one education sphere or another. From there, the process is similar to the one described above, but students actually have an entire week to get work completed if needed.

Essentially, they submit whatever they have on the first publishing date, but there is no pressure or repercussion if the work is not finished; in fact, I encourage students to take their time with the writing process. Then, students have the entire week to seek feedback from me, the school writing centre, a peer, or anyone else they would like to assist them. While I give students time in class before the publishing week to work on the assignment, I also specifically give them time in class during the publishing week so that they can refine their work and seek assistance from me as they are writing. At the end of the week, we have our final publishing date, wherein I tell students that I will mark their last submission. They can submit once, twice, or 50 times; it’s up to them.

Generally, the results have been quite positive. The products themselves are also often more refined, as I now see students thinking more readily during the writing process and, anecdotally, students feel less pressure as a result of having a full week to submit rather than a single day. I still do not accept work after the publishing week; however, I’m able to reconcile this notion with the fact that I let students bring in any work they want for our unit conference. Thus, if a student has not completed an assignment at the end of the publishing week, I encourage them to finish the task so that we can discuss it during our unit conference. In that way, the student could actually still get rewarded on the unit conference for the work they chose to complete despite the tardiness of the submission.

The process isn’t perfect, and I’m certain there is still room for refinement, but it’s an alternative to stand-alone due dates. Moreover, it has allowed me to better mediate that internal struggle between the need for student balance and responsibility. At the very least, this approach has more thought behind its design as compared to my first policy, offers students flexibility with their time and ideas, and doesn’t encourage students to ‘drop dead’ if they miss a submission.

12 thoughts on “An Alternative to Due Dates”