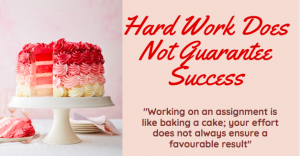 “How did you do on the assignment?” she asked her deskmate tentatively. “I did really well,” the girl responds. “How about you?” “I didn’t do so well. I worked really hard on it too. I hate that: when you work hard on an assignment and you don’t do well.”

The classroom can be a place of insightful conversation when students are working. Often, I’ll overhear students discuss their interests, anecdotes about what’s happening in another class, perspectives from the teenage lens (sometimes referred to as ‘tea’ from our gen-Xers), or, the odd time, a meaningful gem that can be used as the basis for a genuine teachable moment.

I overheard the above conversation last week after handing back an assignment to my grade nine students. One student in particular was disappointed that her efforts did not lend to the result she wanted. I interjected after hearing this remark and responded, “I love what you just said, and, if it’s ok with you, I’d like to use that comment to teach something to the class.” Of course, I promised not to refer to her directly. Naturally, she was surprised that I overheard her comment, despite the mere two desk distance between us, but she gave me the ok to converse with the class. So, as the class was winding down with about five minutes left, I stopped the students and proceeded to give them two analogies.

Analogy two: “You decide to bake a cake. You gather all of your ingredients, prepare your work station, follow the instructions, and work hard to craft this delicious treat. When it’s time to taste the ‘fruits of your labour’, you bite into the cake only to taste salt. You spent time and effort into this dessert, but you forgot the sugar and added salt instead!”

I followed these analogies up with a life adage that I assured the students was free: hard work does not guarantee success. Just because you work hard on something does not ensure that you will see the result you wanted, nor should it. While work ethic is an important element to being successful, like baking a cake, it’s only one ingredient.

Similarly in sports, there might be games where you put in a good effort, yet you still lose the game. In those moments, the result is actually less meaningful than what you decide to do next. Identifying what skills need to be refined, and, most importantly, taking action to make those changes are how we improve, much akin to a team practicing the basics after a loss.

Working on an assignment is like baking a cake or playing sports; your effort does not always ensure a favourable result. When an unwanted result arises, it’s an excellent opportunity to be introspective. If you worked hard on an assignment and you didn’t do as well as you hoped, what skills can you improve upon? What specific elements of the task did you spend time working hard on? What does it look like when you’re working hard? What steps can you take now to ensure that you’re successful in the future?

6 thoughts on “Hard Work Does Not Guarantee Success”