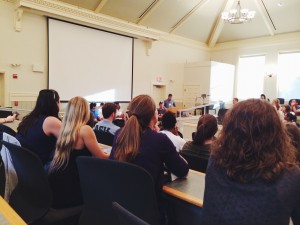 Opening ceremony at the 2014 Klingenstein Institute

Today I arrived at the Klingenstein Summer Institute (KSI), a program run by Teacher’s College at Columbia University for independent school teachers in their first five years of teaching. I am fortunate call many Klingenstein alumni friends and colleagues, each of whom raved about their experience in this two week, intensive program hosted in Lawrenceville, NJ. It turns out that Cohort 21 has a similar reputation here at the KSI.

As I was walking to dinner, about an hour after our arrival, I overheard a woman walking behind me talking to someone else. “It focused on technology, but it was more than that.” she said, “It was the best PD program I’ve ever done!” I turned around to see a familiar face, known to me only through her photo on our course’s Schoology website. Jillian Green, a teacher at the Mabin School in Toronto, was a participant in Cohort 21 in 2012-13. I inserted myself into her conversation, “Are you talking about Cohort 21?” I asked?  Of course she was.

Not only was I thrilled to meet one of the other four Canadians among our ranks, I was even more excited to hear her raving about the Cohort 21 program. She explained that the program not only pushed her boundaries with technology, but provided a rich learning experience in which she was able to learn by doing — blogging, commenting on posts of other teachers, trying new technology and reporting back to the group.

Later in the evening, I also had the pleasure of meeting Aaron Vigar. Aaron had similar great things to say about Garth and Justin (which of course was old news to me). The fourth Canadian in our group was also in the know about Cohort 21. A teacher at Villanova College, Ciara’s department head was a participant in Cohort 21 last year. I was hoping to be able to recruit some new Cohort 21 participants from the KSI group; but, clearly the word is already out.

Stay tuned for more posts from the 2014 Klingenstein Institute. I look forward to sharing my thoughts here, and with my fellow teachers at Greenwood College School and at Cohort 21 when I return.