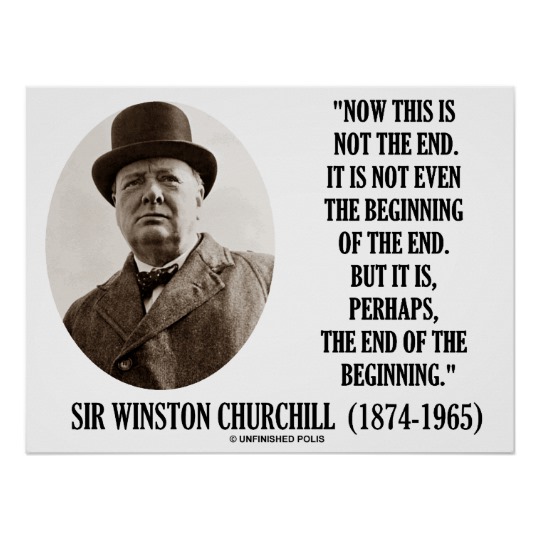 The end of the beginning is bittersweet. I regret not getting more involved in twitter chats and blogging to immerse myself in the cohort experience. As I read other blogs I realize this notion of Cohort 21 guilt permeates through quite a few of them. Each F2F session gives you a kick of energy and inspiration, followed by a drift back to routine. As I scramble to get something down in a final blog, the feeling of “I should have done more” overwhelms.

However, If I actually take a second to think about how much I’ve thought about, chatted with colleagues about, and researched my HMW question, I realize how valuable of an experience this truly is. I never would have done that without being part of this program, so thank you to all the Cohort people who made it all possible.

I have made some very, very, very small changes to my practice and classes (well, one class to be exact), that will hopefully lead to bigger changes in culture and mindset among my math students. I do feel this is still in its infancy phase, but I am ready, willing, and able to continue trying this for the rest of the year and beyond.

I examined using a Standards Based Grading approach in my Grade 10 math class to try and curb the “marks are everything” mindset that most of my students have. In a nutshell, instead of marking things out of a certain KICA weighting, I marked based on the skills they should have been exhibiting in each question. Instead of getting a mark out of a total and a percentage, they got something that looked like this:

The boxes were filled in with check marks if they understood and executed the concept fully in the question, or was circled with feedback indicating where they went wrong and how they could improve.

Now, I wasn’t nearly as ambitious as I could have been, as I only piloted it with formative assessments in one class, but the reactions I got were somewhat in line with what I was hoping for. The students first asked what they “got”, and I explained that they got a list of things that they were either proficient at, or needed to improve upon. When they pressed me for a mark, I explained the purposes of formative assessment and said that they shouldn’t be concerned with their grade, but instead focus on working on the indicated skills to be ready for the upcoming summative assessment.  Whether through frustration or understanding, they stopped arguing.

I meant to take this further and didn’t because of a pile of excuses (time, routine etc.). Fortunately, this gives me a clear path of where to take this.

I’d like to expand this to many grades to give the students a sense of progression throughout their math career at Villanova. They would ideally start in Grade 7 and move with it through to Grade 10. Each year their formative assessments would be graded this way to give them a master library of skills that they should be proficient in by the time they get to Senior math. The skills would be  continually tested and assessed, even if it’s not something taught in the current year (Ex. just because the Pythagorean Theorem is taught in Grade 7 doesn’t mean I cant assess your proficiency in it in Grade 10).  Furthermore, it would give the students a truer sense of where they need to be before embarking onto Senior math. Most importantly, it will hopefully get the students to look at feedback instead of a mark alone.

This obviously isn’t without pitfalls, as it will take buy in from many staff members, as well as a large increase in marking time. I also haven’t necessarily figured out how to record these assessments efficiently and accurately, but that’s for future Andrew to figure out. Present Andrew is just happy he is willing to start making a small change.

Looking back at this final post, it probably should have been split into three blogs and posted along the way over the last three months. Nevertheless, I enjoyed the journey, and will hopefully continue it for years to come.